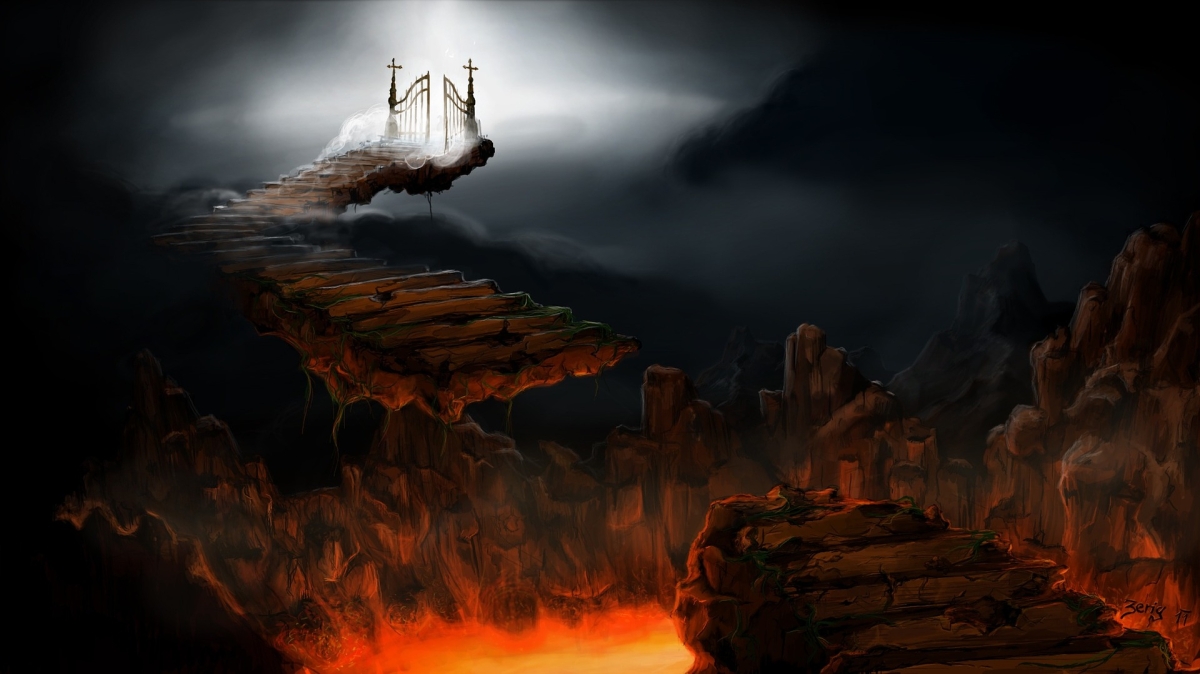 I have been fascinated for a long time in stories about Hell.

On one of the writing courses one of the tutors suggested that we write a story about a neighbour from hell who was literally from hell. (As I mentioned in my earlier post https://magic-phil.co.uk/2018/02/13/on-the-theme-of-hell/)

For some reason this has captured my imagination and over time I have created different stories on this theme.

This is the first of these. Many of them are quite old now and I would rework them today.

But here it is unadulterated in case you like it.

Perhaps this will encourage me to produce more of the same in which case watch this space.

Hi, I’m David and I’m a servant of the Devil.

Of course it isn’t obvious to look at me, I’m a balding middle aged civil servant but nonetheless I am Beelzebub’s man so to speak.  It started when we moved to a small estate in Tunbridge Wells.  I had never liked the place from the beginning.  But the price was right and Deirdre; yes, Deirdre just had to have the place.

It’s comfortable enough in a boring suburban way but any place that has a fridge and a sofa would suffice for me.  Deirdre though has to maintain “standards.”  That started almost the first day.  We had only recently moved in when Deirdre started on about meeting the neighbours.

“You should meet them David, you never know if he might be something important in The City, it doesn’t harm to network”

Frankly I couldn’t see the point in this, I’ve worked as a Junior Civil Servant for twenty years now and I see no obvious break in that career coming anytime soon.

“We should show we are good neighbours David, Go next door and introduce us.”

I noticed the “us” in that sentence and the very final ring to it.  A decision had been made, and I was to be the one to implement it.  I didn’t even dare sigh.  I shed the carpet slippers with regret – I had just got comfortable with The Sunday Times (one of my rare pleasures).

I am not naturally an outgoing person, I would happily leave the neighbours to themselves, however Deirdre had spoken.  (I am more frightened of Deirdre than the unknown quantity of the neighbours).

The house from a distance looked exactly like ours. It looked comfortable four-bedroomed detached with a beautiful white picket fence and a tidy arbour over a tiny front gate.

However as I approached the road appeared to darken and clouds began to gather. The gate began to look horribly distant when previously it had been mere feet from mine. I paused uncertainly. The charming arbour with red English rose seemed to be writhing like a nest of snakes. The pleasant curving aspect of a moment ago now seemed to me a gaunt gothic archway. I felt the challenge of the few steps to be too much. Something was definitely wrong.

However into my head rushed the vision of Deirdre: if I returned without having performed my little “task”.  The glare, the folded arms, that stare which told me what a pointless little individual I truly was.  I shuddered and then hastened on.

The tiny white gate now seemed to be of rusty iron (how strange what a change in perspective can do).  And the picket fence I noticed also iron – it reminded me uncomfortably of the cage surrounding a Victorian grave.

I girded myself for the short walk to the door.  This was ridiculous I told myself – a perfectly charming little place.  As I pulled, open the gate to a sound like wood tortured by a gale I distinctly heard the tolling of a resonant bell but from a great distance.  The grass surrounding the path swirled and twisted as if animated with menace, which seemed odd.  When I had set off the day was fine and clear – mere seconds ago.  It was as if the garden had weather of its own.  I realised that I had closed my eyes against the “illusion”.  As I opened them, I recognised that I had been wrong all along, the garden was dead, dry and brown, dusty grass bordered by dried out stumps of a herb garden.  I mused that they certainly needed to get the gardener in.

I hastened to the door – a plain white UPVC door with a faux brass knocker.  At last, I thought something sensible to latch onto.  I lifted the knocker and was amazed at its extreme weight and that it appeared to be hot like a pie direct from the oven.  I flinched immediately and the knocker fell with an enormous clash like hammer meeting anvil.

The door slowly swung inwards as if assisted from behind.  I could feel the sweat beads – clammy in my armpits and cold as they trickled down my ribcage.  “Hello is there anybody there”.

It must be a shy child, that’s it, hiding behind the door, that’s what it is.  I could feel myself trembling just a little.  But the vision of Deirdre firmly in my mind I stepped in.

The door slammed immediately shut behind me with a sound more normally associated with a massive door of oak closing on a vast frame.  I think I would complain to the double-glazing company I reflected whilst peering around what appeared to be an unusually vast hall.

Nothing at all like ours, I couldn’t even see the ceiling and the dining-room door seemed an impossibly long distance away.

Odd that they have the heating on, I remember thinking.  So strange in July, it’s like a real oven in here.  I could feel my white shirt become transparent as it fixed itself firmly to my spine – pulling it free was pointless.  It was more humid than a rainforest.  The neighbour must grow tropical plants I thought to myself.

I could hear the trembling highness of my voice.  I really did not want to be here any longer than I had to.  A quick hello and then go I assured myself.

I stepped into the impossibly long hall and perceived in the distance a standard hardboard-faced door.  Very retro I thought, time they had a man in to replace that.  The door seemed completely smooth and gleamed an impossible brilliance of white.

In front of it gyrating and jumping a Chihuahua.  It appeared to be a Chihuahua at any rate.  The yapping also had a familiar tone to it (Deirdre’s mother owns one; she says it is more fun to live with than her ex-husband ever was). I’ve always hated them; they seem perfectly capable of inflicting a very painful wound only to be swept up by the doting owner as if you had hurt them.

This one was strange though, it must have been the odd lighting but I could swear it seemed to have three heads!

The dining room door swung inwards with a scraping noise like stone dragged across massive stone.  This chap must be a sound effects man I thought, quite amazing the effects he can produce.  Well I sighed, that lets down Deirdre’s view of a chap in the city.

As I peered forwards (still apparently some yards from the doorway), I noticed their obscure taste in carpets. From this distance the red and grey carpet appeared like hot coals.

I could almost feel a sense of panic rise within me.

Then a voice both sweet and soothing spoke directly into my ear as if the owner was stood right beside me.

“Mr Blythe, do come in, have a drink”

I didn’t remember to jump, I didn’t remember to be afraid, I couldn’t remember ever mentioning my name. I felt so relaxed so calm suddenly. Some distant voice was yelling “you’re in mortal danger, leave, leave now”. But that was only from inside my own head, I wasn’t about to pay attention to that when I could listen to this beautiful voice right here.

I turned slowly and looked straight into feral eyes.  Not human, more like a cat, devoid of any emotion, yet somehow echoing back concern and charm.  Subconsciously I was thinking I bet this man could con his way into the royal mint.  The face smiled, a smile without warmth, like the gape of a large carnivore.

I couldn’t remember moving, but I was sitting, relaxed in a very comfortable high-back chair. A glass of something was positioned conveniently by my right hand. The light was terrible everywhere in this house I determined. The glass seemed to hold a half pint of steaming blood (or at least blood colour liquid). Revolving slowly at the top of the glass appeared to be a large eyeball, which turned and fixed me with a baleful stare. I set the glass slowly on the floor to hide it. I did not wish to offend my host.

I hadn’t seen him, concealed as he was in shadows just opposite me in a chair very like the one I was occupying.  Somehow, his chair seemed vast in comparison with mine though, fully ten times the size.  I couldn’t imagine how I could have looked into his eyes only moments before.  Oh, this is ridiculous I told myself.

“Right, Right” I mentally tried to recall if we had met previously but I failed utterly.  I shivered.

“More Deirdre’s choice than yours wasn’t it”

I recalled the first visit – even the drive up to the house had felt uncomfortable – I put it down to a head cold, but nonetheless I had been very glad to leave.

“I am just a piece of folklore of course”

“A piece of folklore, people can’t actually see The Devil”

“The what?  Sorry I thought I heard you describe yourself as the…”

“Devil, yes of course, but I am just a series of ideas, not a ‘thing’ as such”

His eyes flashed yellow and at the same time, a stream of images began to play in my head.  I began to realise that Hell was not a place beneath the tarmac after all.

I had been living in it for the past forty-five years.