My search for a wreck of the week brings up this week the hard cash that underpins a lot of the nostalgia boom we have seen recently:

However, as we have seen with anything carrying a blue oval, the effects of this are not just confined to the rarefied heights of hedge manager salaries.

It has become (and looks likely to continue for a while to be) very difficult for a person of moderate to modest means to get involved in the classic car hobby.

However I remember a similar time in the 1980s where classic cars started to look a great investment. People bought crumbly wrecks gave them a cheap respray and flogged them for serious money.

Then there was a downturn: several people who bought cars as an “investment” got burned. The upside being that the guy who wanted to tinker in his shed got a look in once again.

We can hope that cars will start to return to sensible in the near future. However, sadly the keys to that E-Type I’ve always dreamed off are likely to remain in someone else’s hands in perpetuity.

“Rust in peace” searches this week bring me to this article https://www.thesun.co.uk/living/2092341/stunning-pictures-show-how-nature-has-reclaimed-cars-left-abandoned-across-europe/ featuring the work of Roman Robroek who loves to take pictures of abandoned cars. I took a chance that the name was unusual and believe that I have found the photography site that the article is about:

It is a fascinating site which causes me to regret the fact that I cannot operate a camera (even if given instructions designed for a five year old).

Some of the pictures are truly beautiful. In the case of the cars I do wonder where they are and if anyone will step up and try to save them.

Even better I have been in touch with Roman and he is happy for me to use some of his pictures in my blog. So I am very happy about that and grateful thanks to Roman. (The featured image in the blog this week is one of his).

This week’s YouTube video is a light hearted effort from Pathé set in Reading.

This shows a very different attitude in 1963 to today – cars having no value at all when they got to a certain age. As a result cars were dumped – quite literally anywhere that a person could find to dump them.

The announcer refers to the introduction of testing, which leads me to suspect that the MOT is not as venerable as I once thought.

It appears the MOT was introduced in 1960 so just 3 years prior to the film. A very large number of vehicles initially failed and so the requirements for testing were enhanced. (Presumably this was because the roads had many unsafe vehicles on them).

Initially cars older than 10 years were tested (many failed). In 1961 this became 7 years, in 1967 it became 3 years. Since then the requirements for the age of vehicles haven’t changed but the items being tested have increased with time.

The film takes a comedic approach which includes a very strange episode at the end involving explosives. This is more akin to something you might have seen a circus clown performing.

Many of the cars in the film would be very desirable today so it is sad to see that they were just discarded.

However the vehicles would have been merely 10 or so years old at that stage and 10 year old vehicles today have limited value. Little has changed.

I checked the example of LJ2393 (the smoking vehicle in the latter part of the film). It is not on the DVLA database. So it did not survive. No wonder that vehicles of this age are valued – precious few seem to have made it this far. The exploding vehicle has registration HH – TR645 which is an odd plate. Being the suspicious type I checked it. It is invalid and so almost certainly the vehicle isn’t a vehicle at all but merely a film prop.

This week I was sent details of some marvellous BBC sound effects which include some early car sounds and car-related sounds. http://bbcsfx.acropolis.org.uk/

This is listed as “Cars: 1.6 GL (Manual) 1982 model Ford Cortina. Exterior, tickover recorded near exhaust”. Which for anyone who is wondering what a car of the 1980s would sound like is pretty close to how I remember.

Back to Wreck of the Week proper and another ruster drawn from the nation’s favourite auction site.

This one struck my eye because it is just up the road from me and very close to where my partner is working currently.

I say is, however the listing has been ended because the vehicle is “no longer available” so we have to assume it found a buyer, eager or otherwise.

Originally listed at £2,300.00 sadly there is no automotive equivalent of the land registry to determine what it actually made in the end. (Even if there was – the absence of any registration details makes such a search impossible).

We’re treated to 5, yup 5 gleaming pictures of marvelousness to sate our nostalgia demons. The text doesn’t do much more to convey anything:

WHAT YOU SEE IS WHAT YOU GET

THERE IS NO PAPERWORK WITH THIS CAR

PLEASE NOTE THE ANGLIA AND FAST BACK ARE NOT FOR SALE”

I’ve left the shouty text in place this time to convey the full-on nature of modern auction site listings. If someone was speaking like this I would rather be at the other end of a very long room.

Now Royston is a big place but for those not of the United Kingdom (or maybe those of its further flung elements of this nation) here is the approximate location of said vehicle:

So what are we getting in this “What you see is what you get” auction. 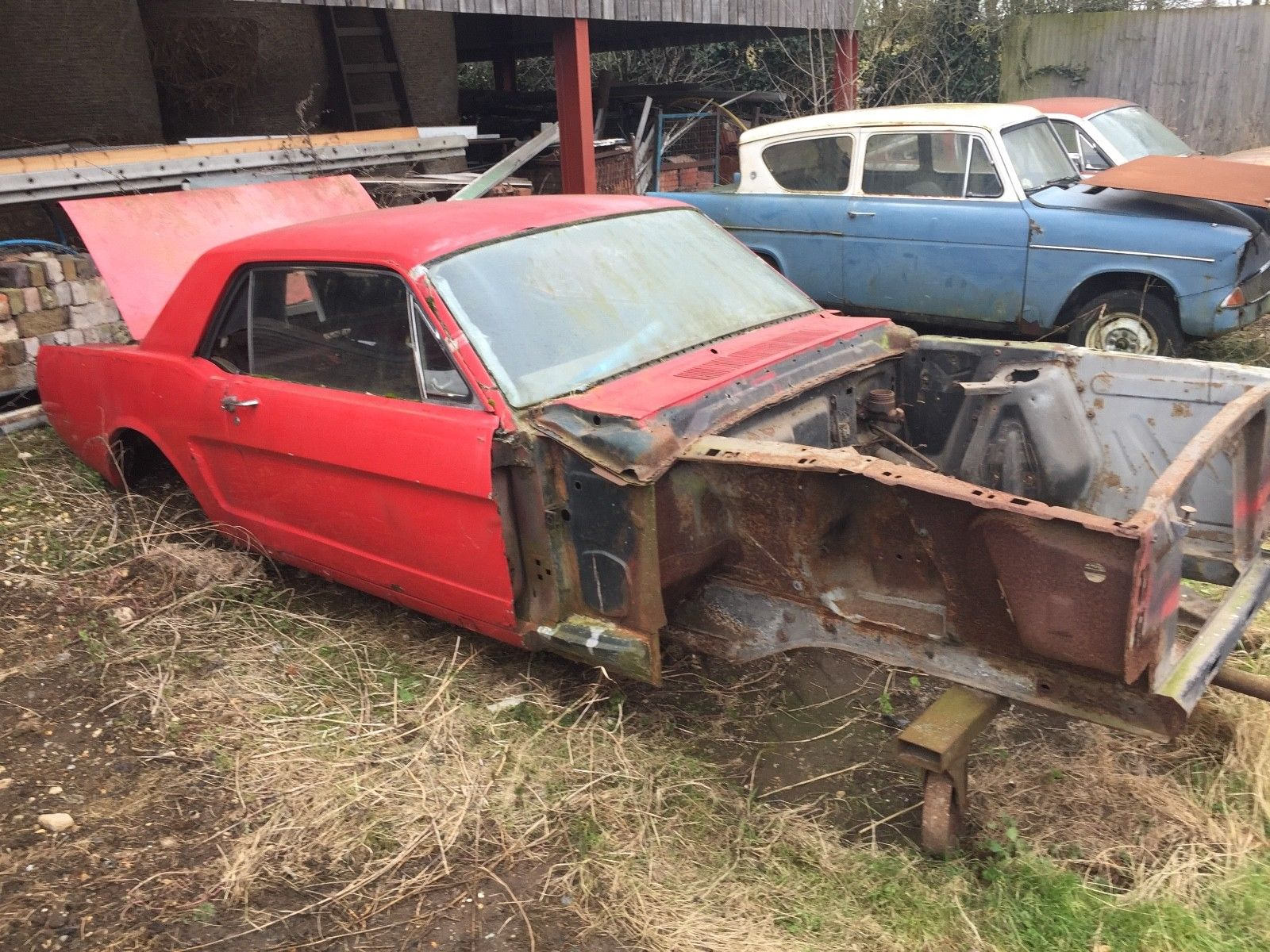 Shame it is not for sale that Anglia looks much more my cup of tea to be honest. I can’t see enough of the vehicle beyond it to make out what it is, but what a marvellous place with all these pieces of automotive history lined up just ripe for the restorer to feast his eyes upon.

In any case from the text we can ascertain that the car for sale is in the foreground, none of those in the background are so hands off sonny.

All we know about it is that it is 1966. There are no registration details and given there is no paperwork it is easily feasible that the car was never registered in the UK – we’ve covered the niceties of the NOVA system before.

However some comments on the impact where you have no documentation at all are here:

Put it this way I am not certain I would want to wind my way through the various departments to satisfy them that the vehicle has been properly imported and that all relevant taxes have been paid. It is not clear what happens if you don’t satisfy them but an unregistered car is without value (unless you want to limit it to the race track) and unpaid tax can become an expensive problem… 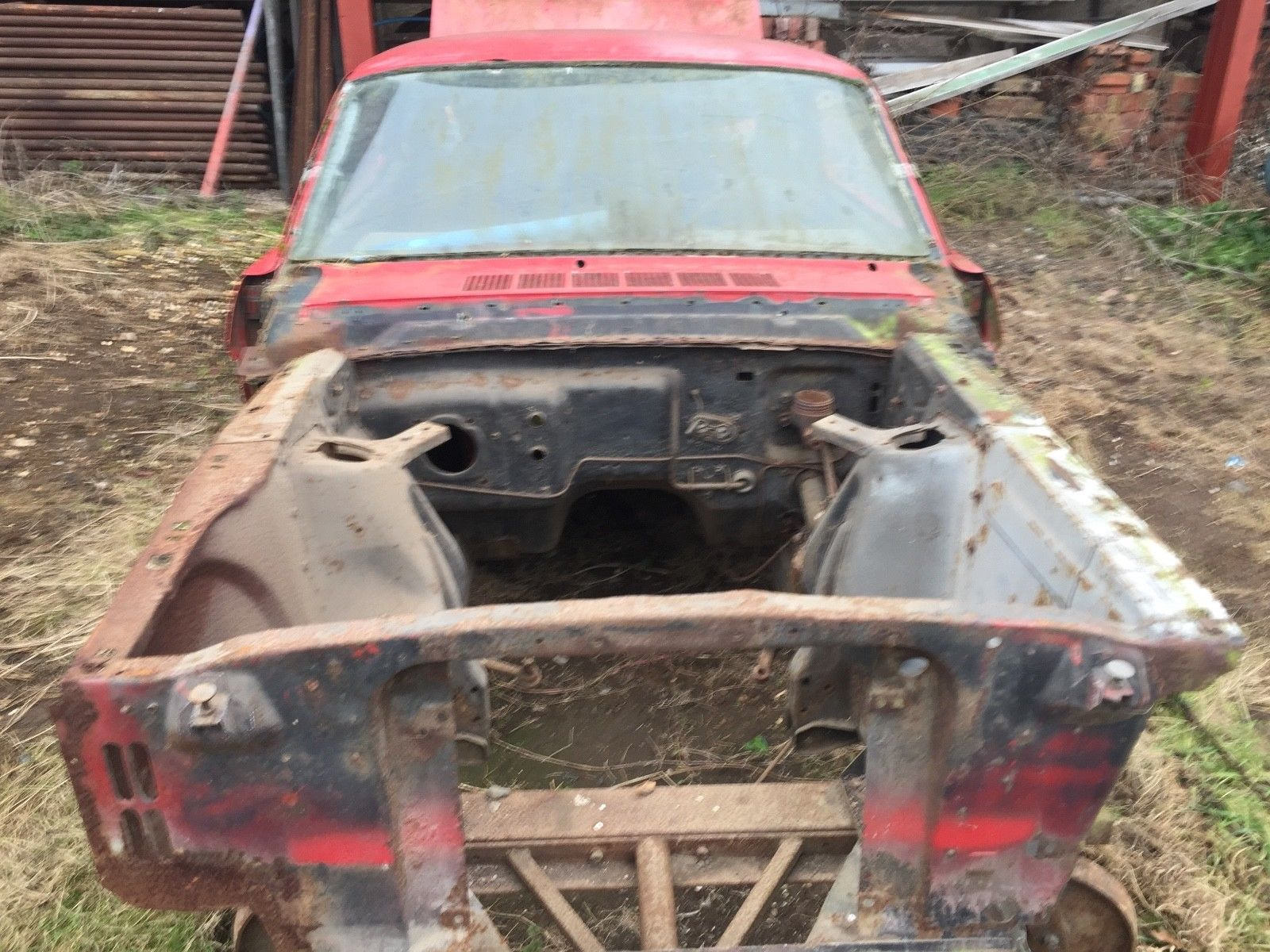 So apart from the soft-porn focusing (we’re kind of used to that now I think ) what have we. No engine, no gearbox, no front wings, no ancilliaries, no suspension, little or no braking system, no front panels. In fact it appears more like the before in a banger race.

As it stands though what can be seen does not look excessively rusty. So it is possible that this could be used to reshell a car that was completely gone bodywise but had most of the parts.

Unlike a previous Wreck of the Week featuring a Mustang this one has a windscreen and so perhaps there is some hope for the interior. 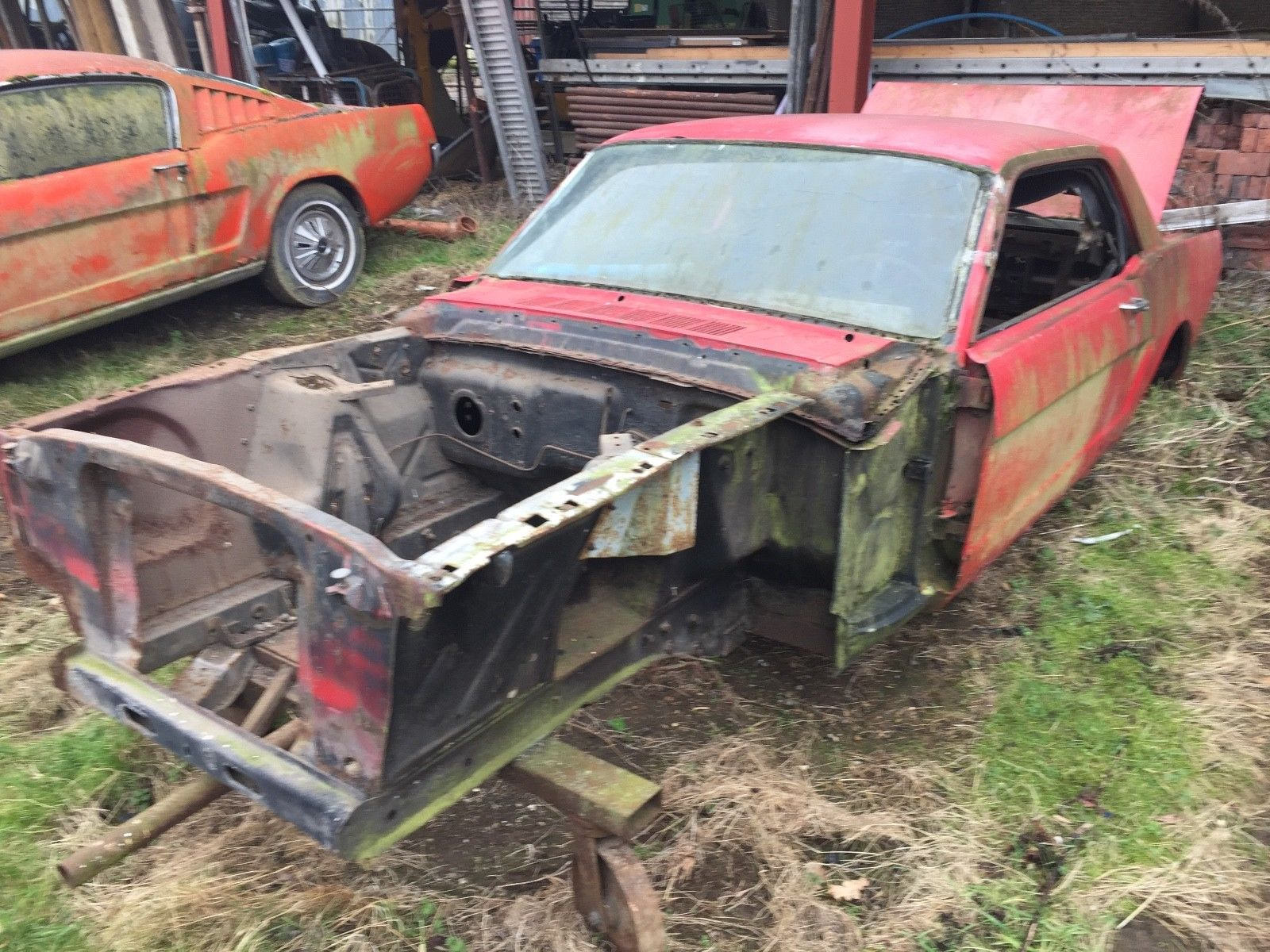 To be fair, if you’ve been following Wreck of the Week for any period of time then you will have seen much rustier prospects but potentially not cars that have less included with them. (Even the windscreen wipers are absent from this one).

What surprises me from the pictures is that you can fit a stonking V8 between those suspension turrets but scale is something that photographs may not convey well. 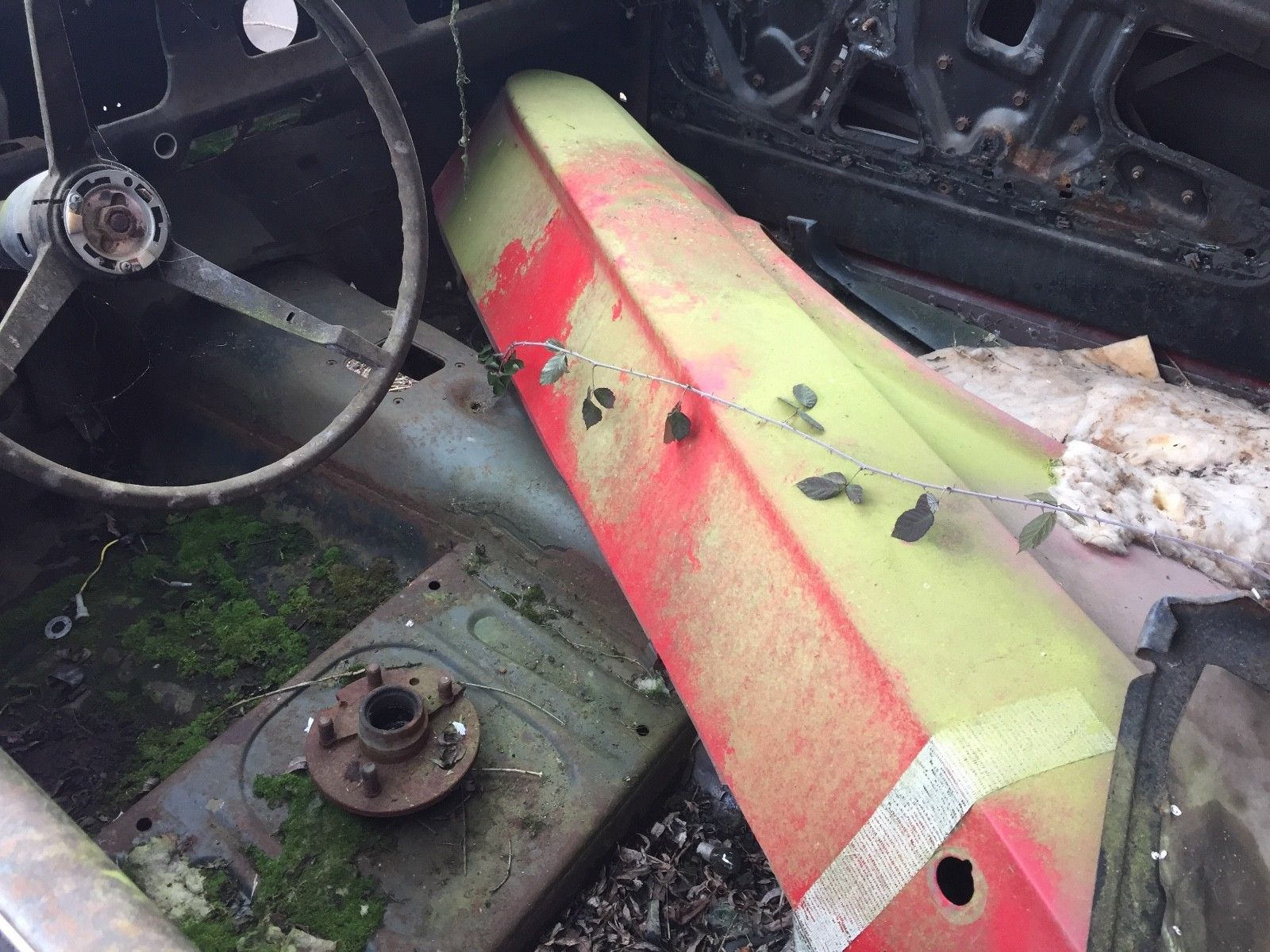 Ok, the interior is not quite (but almost) a pond. Heavy moss growth indicates that starting on the car now before it gets much worse is probably an astute plan. The algae covered item may well be the front offside wing although there is no sign of the normal use of car-as-shed approach. This means that there doesn’t appear to be the usual smorgasbord of spares that some of these adverts entice us with.

Not a particularly easy view of much of the interior but apart from the previously noted no gearbox problem, there are no carpets, no seats, no dashboard, a steering wheel which is missing some parts.

On the upside it does look relatively intact metalwise – not much call for Joe le welder here. (Those fans of the welding art form can groan now).

I’m unclear why the rear footwell is a storage vessel for odd fastenings – perhaps it had visions of becoming a shed and never got that far. 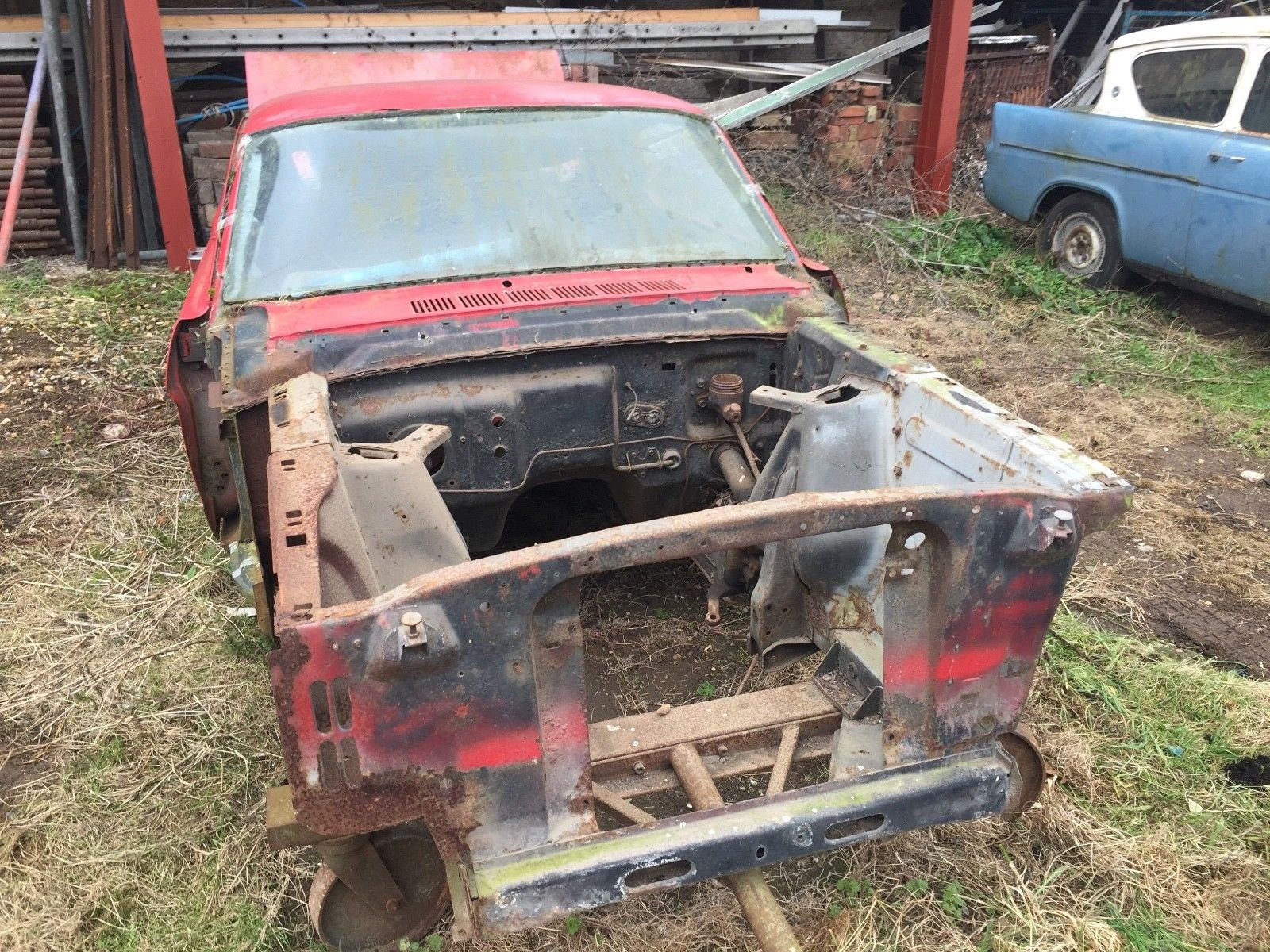 Perhaps a better focused version of one we’ve seen before. So no clues about the rear, the boot area, the underside (other than what we can glean from the interior shot), the rear wheelarches – other glass in the car and so on and so fifth.

Well that’s it, no more images to enthral us.

So necessarily a brief one this week. You’ll have to go and do some real work now.

Next week lets hope someone who was a true David Bailey. Preferably one with laryngitis of the advertising text as well.

If you took this one home please let us know what you did with her, it would be fascinating to discover what kind of future she has..