This week’s Wreck of the Week pulls up an article on the loss of an old friend.

Ronnie Hanney drove his family onto the sands at Gwithian Towans Beach Cornwall on January 13th 1990. Completely misjudging the nature of the sands he was unable to extract the vehicle and was forced to leave it as the tide returned. The vehicle was said to be 22 years old at the time (so 1968). It was buried roof down in the sand and remains so to this day only the chassis re-emerging at intervals.

Please someone go extricate it and get it back to roadworthiness. (Mr Hanney is no longer with us and so is unlikely to be doing the work himself.)

My continual searches for new “rust in peace” items brings me once again to Ireland (Ireland was the location of the video in the last rust in peace).

This time a forum with several pictures of cars left to rust away. Despite enquiries no one seemed to be aware where any of the cars actually were. Rather like the YouTube videos that we’ve been watching no chance at all of dragging them out of a hedge and rebuilding them.

This is not the world’s greatest collection and very oddly arranged a very sorry sight indeed. The Americans do seem to be doing this kind of stuff in greater volume than anyone else as far as I can tell. This time there is barely a spare part worth saving as far as I can see. Mostly they are ghosts of former cars just two steps away from compost.

It’s very sad, especially as some of them look like such interesting vehicles.

This week I was sent an article on classic nostalgia abroad. This was obviously something to tempt me to use a travel company’s services. However to me it is fantastic to discover that all around the world people are in love with their cars. Long may that remain the case.

And so to the main subject of this week’s Wreck of the Week.

I’ve no idea what it sold for, it’s concluding label being “This listing was ended by the seller because the item is no longer available”. I take it that the car was listed elsewhere and someone made an offer that couldn’t be refused.

Lots of parts on the shell

For more info call me on

In the (now standard for auction site listings) shouty text – I’ve muted it to save your ears.

It was located in Hereford but that’s a large place and there are no other details for me to give you a better map of location than this:

As a classified ad there is no bid history and so no clues as to the keenness of people to have an ingot of automotive history.

As far as I can tell it looks good only for parts – and a lot of those were missing. Let’s have a look at her to see what I mean.

There’s a measly 5 images with this listing I’m afraid which is little for us barn-find adherents to hold onto. 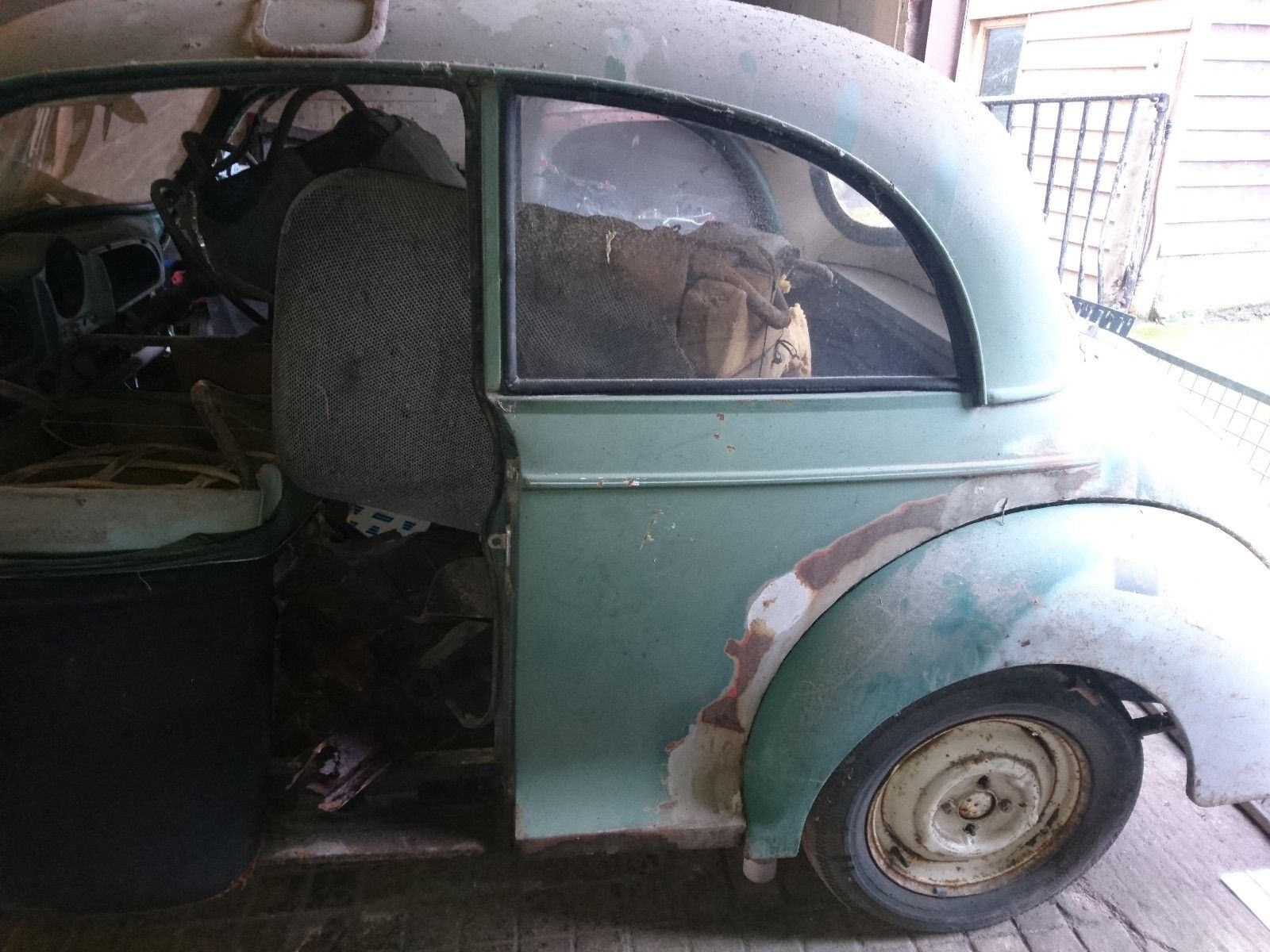 So the now standard – (probably has an ISO number) approach to car listings:

On the face of it much of the car is sat inside it, if you were looking to perform a restoration then you would want some kind of assurances that all – or at least most of the parts were there.

As someone remarked on a classic car programme recently – “all of the parts are never there”.

As you will see later, this shot is beautifully framed and does not in any way prepare you for the quantity of work that is inevitably going to be required. 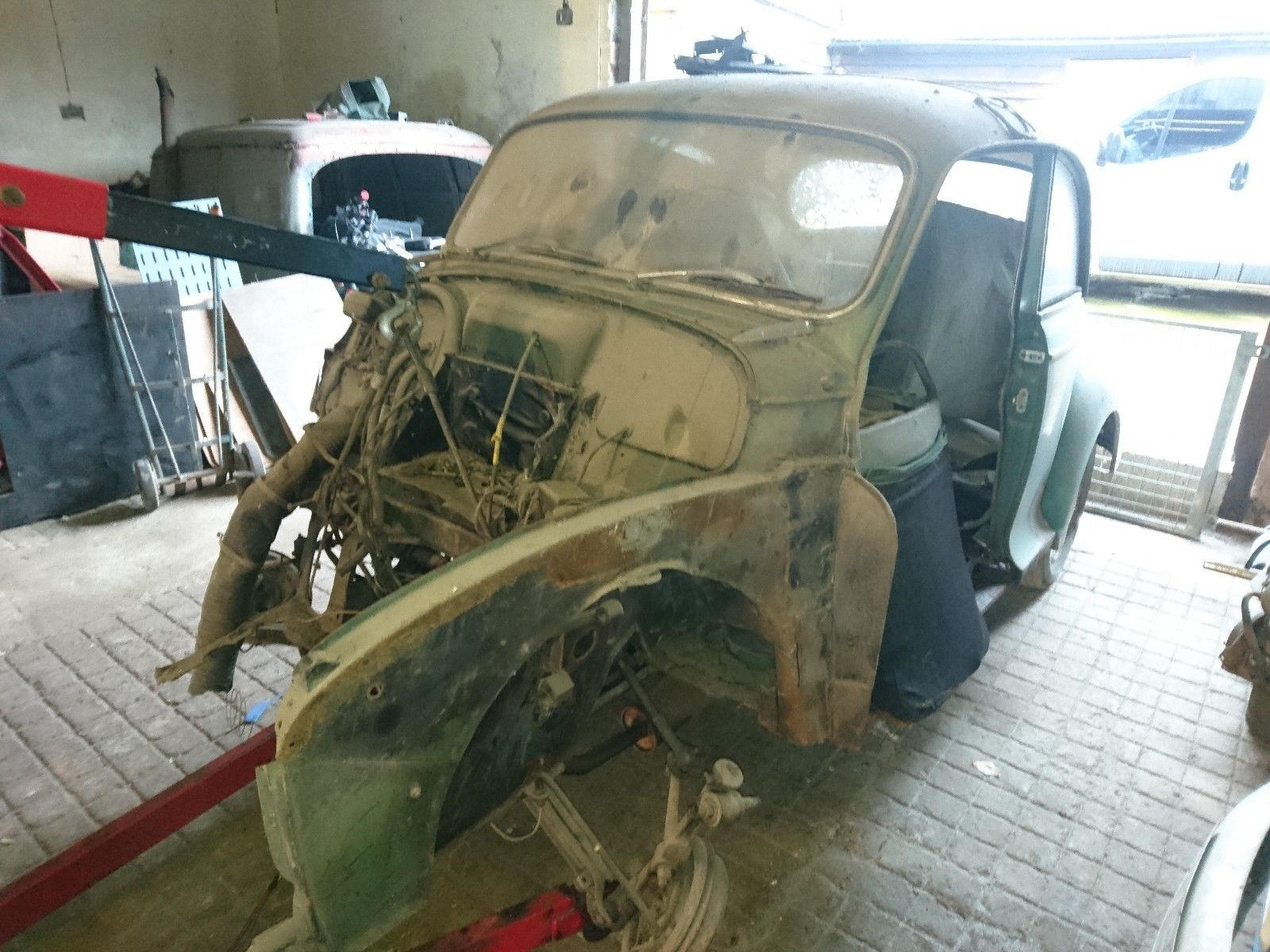 And now it becomes plain, what there is of the car does not look that bad. The downside being that you only have half of the car.

Given the inner wing on the driver’s side has been sawn off – getting it true and level to the original specification is going to be work taking not a little skill.

Whoever bought it must have felt themselves equal to the challenge. More likely though the buyer had a Morris Minor in better shape but requiring a few parts that this one could supply. 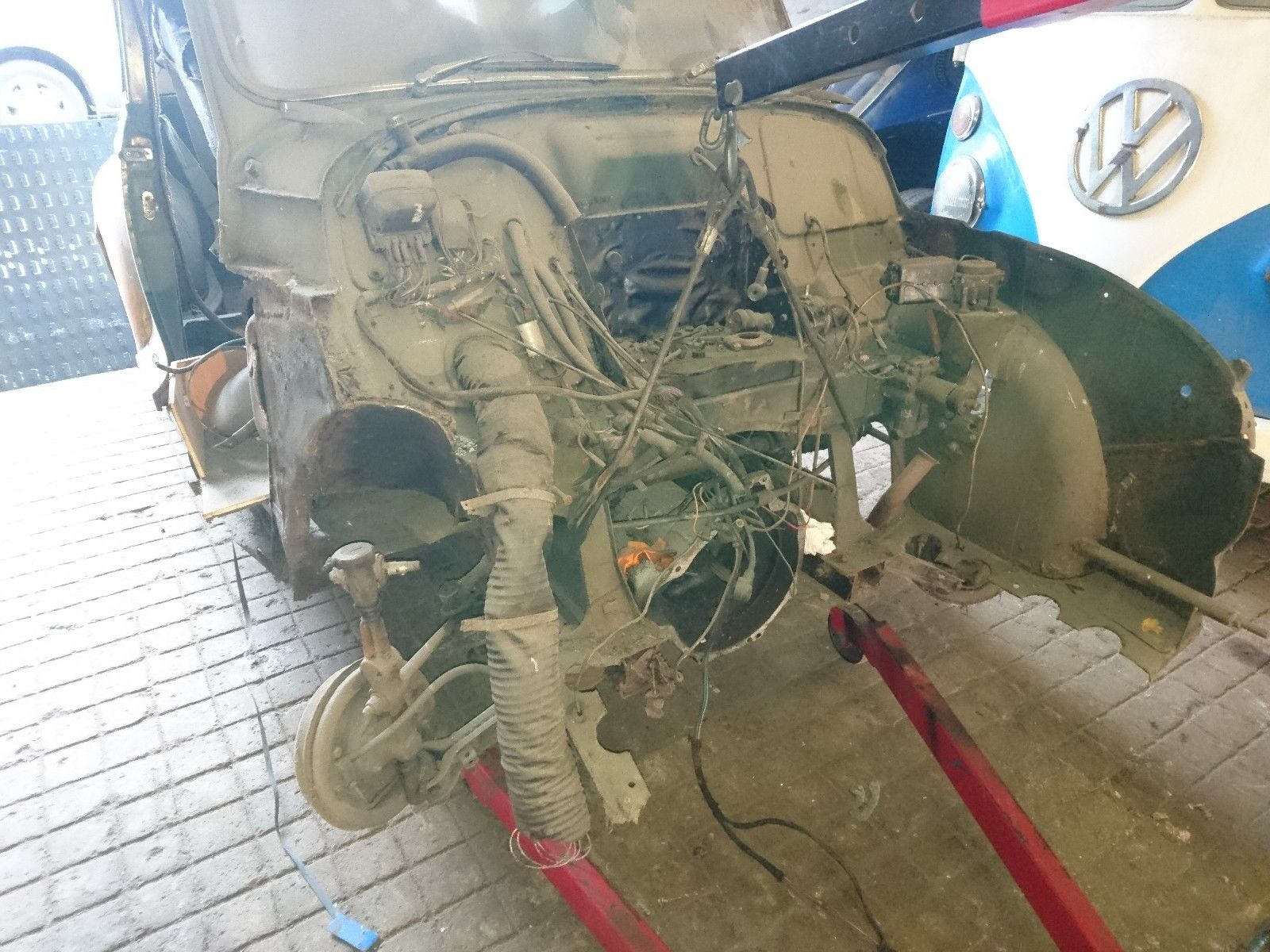 Still as we have seen on a previous Wreck of the Week the value of these Morris’s is down in the weeds and it is a brave person who will take one on. The cost of restoring will soon gobble through any differential between its price and the price of buying a good one.

I suppose that there are less outcries of “sacrilege” should someone wish to improve the performance with an engine swap; update the brakes or install a supercharger for example.

I’m rather in favour of people being able to make their cars just how they want them, so maybe the low price of entry is a passport and not a barrier.

I recently met a man who had restored a MKI Escort and sold it to pay for his daughter’s path through university. Another man spent hours of his life restoring a Capri and then sold it – to the shock of his friends.

Whilst the high price of the blue badge ensures that many more are recovered. It also ensures that several people are unable to get a historic Ford due to the high cost of entry now.

And some who have cherished cars find that they now need to sell them to fund other life events because there is now so much money tied up in them. It’s like the story of the elderly people who now have to sell their house (even if to an equity release scheme) because the one thing of value they have left is their house.

Perhaps Morris will become the unsung heroes of the classic world, cars the average man can still buy, tinker with, modify, and ultimately sell without the kind of fear that wallet-breaking prices can engender. 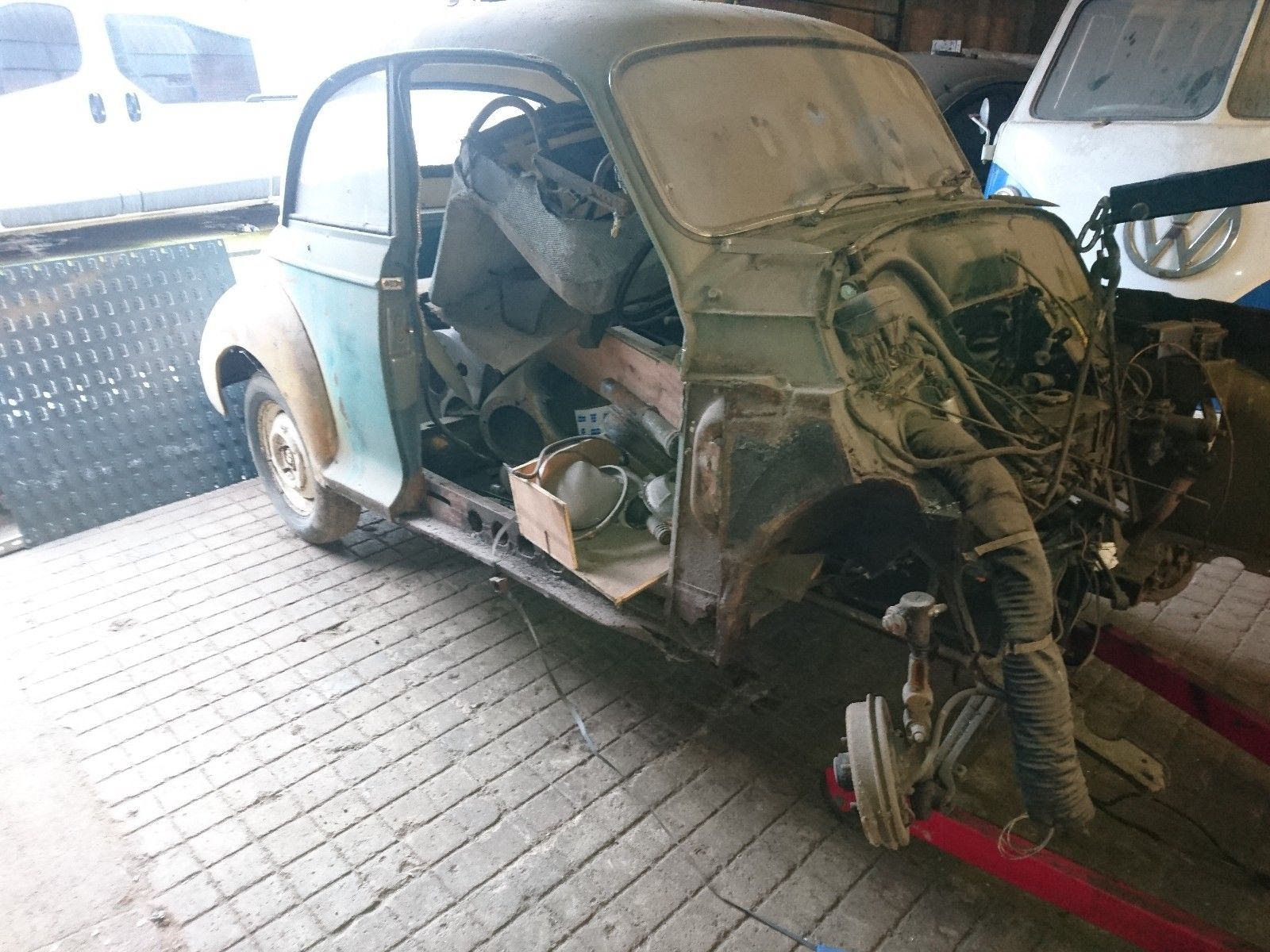 Looking at this I have a sense that whoever bought it might have wanted spares. There are a fair number of spares in that car, including the odd panel; it probably means that this one is not going to see the highway again.

In many ways if it had not been laid about with the plasma cutter it might have been rescuable. There have been some shocking cars we’ve seen in Wreck of the Week which optimistic sellers believe are recoverable.

Assuming that belief is sound – with only a little more attached steel someone might have made a go of this one.

Perhaps someone finished cutting the front off this one and made an interesting trailer of it. (Others have done this before  http://www.mmoc.org.uk/Messageboard/viewtopic.php?t=29444&start=15) 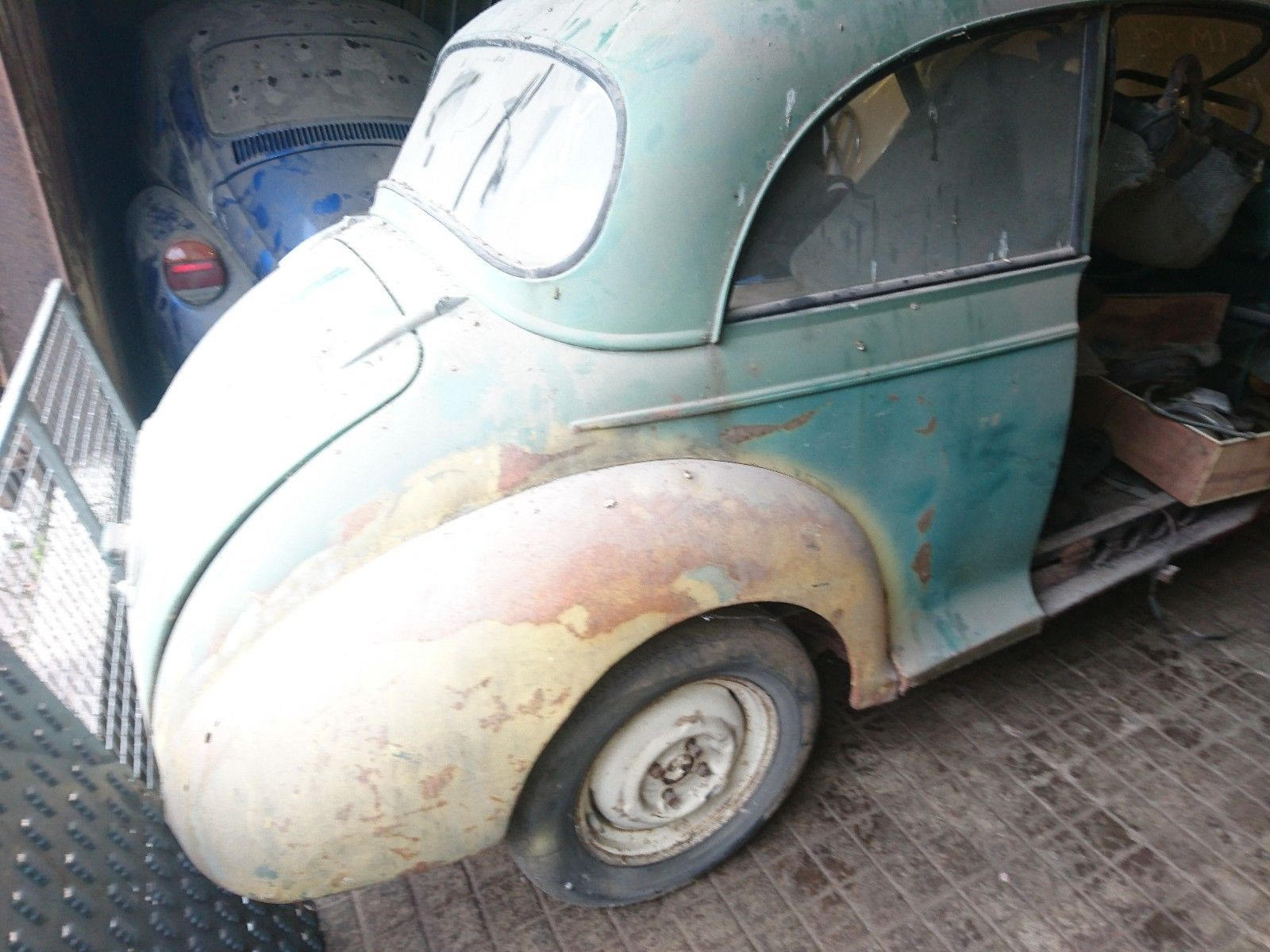 Well at least the claims that the rear wings are in good condition seems to be a valid one. Makes me wonder why it is chopped about so much; another Minor in need of those bits that have been excised maybe?

Well if you bought this car please share what it is that you intend to do with her.