With a blog entitled “The Procrastination Pen” I suppose it is reasonable to expect that at some stage there would be something on procrastination.

To be honest the naming was something that came to light after several days of brain stretching. It was only fixed after I discovered that all my other great name ideas were already taken.

(This is fairly familiar, see my discoveries about the use of the term “Wreck of the Week”).

It was all going swimmingly until Amazon launched a product which is actually called a  “Procrastination Pen”. This consigns my little blog to low down in the Google search results.

Anyway enough of this – suffice to say that the title “Procrastination Pen” was in the search for a unique blog title rather than some manifesto of intent.

However it is not a title without aptness. Throughout my life I have struggled with procrastination. At times I would rather clean the toilet than embark on the task that I regard as the most important. During revision for the various exams I have undertaken in my life I have dusted, hoovered and tended the garden to avoid picking up a single book.

And so it was with great embrace that I greeted the book that is the subject of this post.

If like me you have symptoms of procrastination in your life I recommend that you buy this before any other book on the subject. 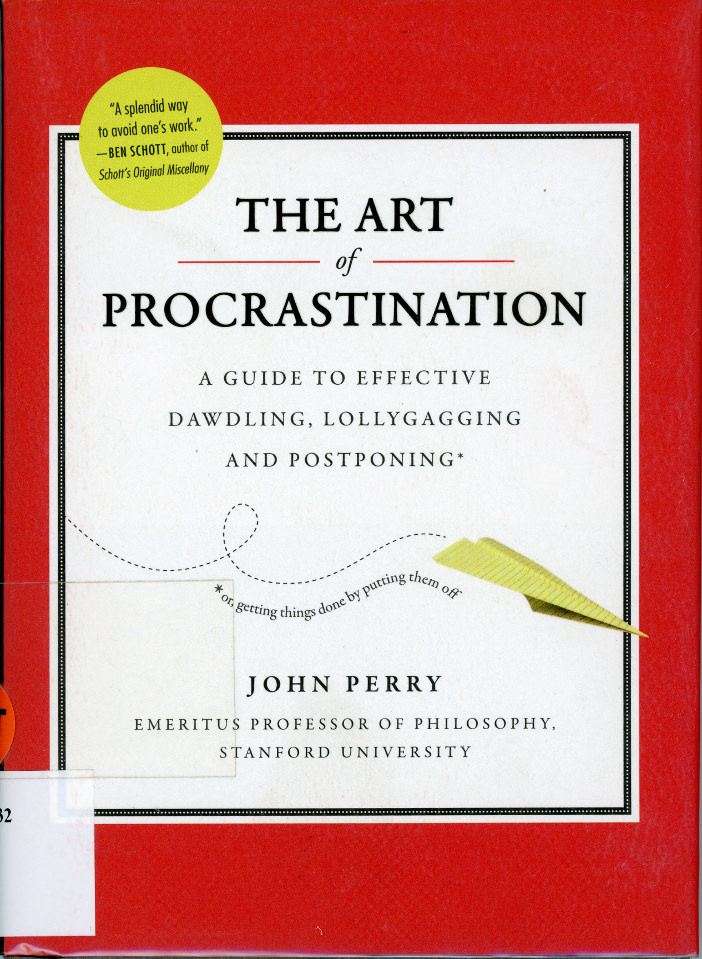 My copy is now very precious to me.

John turns out to have been a lifelong procrastinator of the advanced order. This puts him in a uniquely sympathetic position to other sufferers. He is the most positive person I have encountered when it comes to the treatment of procrastination.

If you want a flavour for the author’s style then visit his website here.

He raises the idea of akrasia (apparently originally from Aristotle). This describes why people will do anything other than the thing they are supposed to be doing.

He proposes that procrastinators far from being inefficient wastrels actually get a great deal of work done. However they get that work done whilst avoiding some other task.

Perversely they may be seen to be very hard-working and efficient as a result.

The major outcome of which is that being a procrastinator is quite positive and nothing whatsoever to be ashamed of.

Although he is perhaps the first to propose the term “structured procrastination” to cover this behaviour the first to write about it apparently was Robert Benchley in the Chicago Tribune in 1930. The article “How to Get Things Done” is now the subject of a blog posting.

The benefits of structured procrastination (as opposed I suppose to doing absolutely nothing) is that it is feasible to get procrastination to work in your favour. A great deal of work can be accomplished whilst avoiding the task you really do not want to engage with.

The issue is that mentally (or physically if we can bring ourselves to be that organised) we have a list of tasks which we must accomplish.

Habitually a procrastinator will have the most important task glaring him or her in the face. He or she is quite prepared to exercise his or her self in the performance of tasks lower down that list to avoid that most important task.

The wrong thing to do when you have this mindset is to address the task directly. Worse still is to attempt to minimise the distracting tasks to focus fully on the main one. If you succeed then the only way to avoid the main task is to do something which is not constructive – watch the television, cut your toenails, pick your nose and so on.

Alternatively, if no likely task presents itself, promote one of the less important tasks to be the most important one.

This means you have to fool yourself that this task is more important. As John points out we fool ourselves all the time anyway in the pursuit of procrastination so we’re already experts at this.

Procrastinators are fantasists, unable to complete the task perfectly but nonetheless imagining that they are able to do so.

Finding themselves unable to complete a task to this imagined standard of perfection means the task does not get done.

That is unless the task has a deadline, in which case as the deadline passes guilt kicks in. The procrastinator attains a mad scramble to complete the task. In the process he or she gives his or herself permission to do a less than perfect job.

John states that we would be better using a task triage in this situation. Decide which tasks you can forget altogether, which you can forget until later, and which to start work on.

In the process decide whether a half-arsed job is sufficient or if a perfect job really is needed.

Surely the bane of any procrastinator and the subject of way too much time-management reading I’ve performed over the years.

Procrastinators keep lists – either mentally or, for the more disciplined, physically.

The lists are pretty pointless. The only reason they are created is to get the buzz from crossing things off the list. Hence the list grows with items that did not need to be on the list simply for the feedback of all those ticks.

Where lists do come into their own is when the procrastinator is faced with a task that he or she cannot face. Something so daunting that nominating some other task as the most important will surely fail.

Here the task needs salami slicing. Each component of the task listed out so that the procrastinator can approach it piecemeal.

The safest time to make such a list is just before sleep – that way you’re less inclined to be distracted.

Motivational music is well worth having.

Personally I think that you can’t go far wrong with this:

You will have your own preferences.

These are bread and butter for the procrastinator, email and web surfing for example. Avoiding these is not realistic. Set something that will interrupt you. At least you will stop emailing/surfing the web (or alternative distraction of choice) and do some work before the sun sets.

A lot of procrastinators work by spreading papers across the desk. Do not resist this if it is you.

Putting papers into filing cabinets is an almost certain way of never dealing with those papers again. If you are not bound by a clear desk policy feel free to leave the papers exactly where they are when you stop working. That way you can instantly pick up where you left off.

Procrastinators drive such people mad. Non-Procrastinators are useful to have around. They will insist that you work in a non-procrastinating way. This can be very motivational (if hard on any relationship that you have with them).

Obsessively productive people may choose to do the tasks for you. Make sure that you contribute equally if so.

A surprisingly large number of tasks don’t need doing at all. By not working on them you gain time that non-procrastinators lose.

Some tasks find better qualified people to work on them and they also disappear from your mental (or physical) to do list.

There are many ways to spend time and many opinions about the best way to spend time. Spending time daydreaming may in the long run be more productive than writing that essay.

Whilst John is positive throughout about the impact of procrastinators he does reference some material which is likely to bite a bit harder.

For those determined to beat their procrastination into submission John recommends this book: 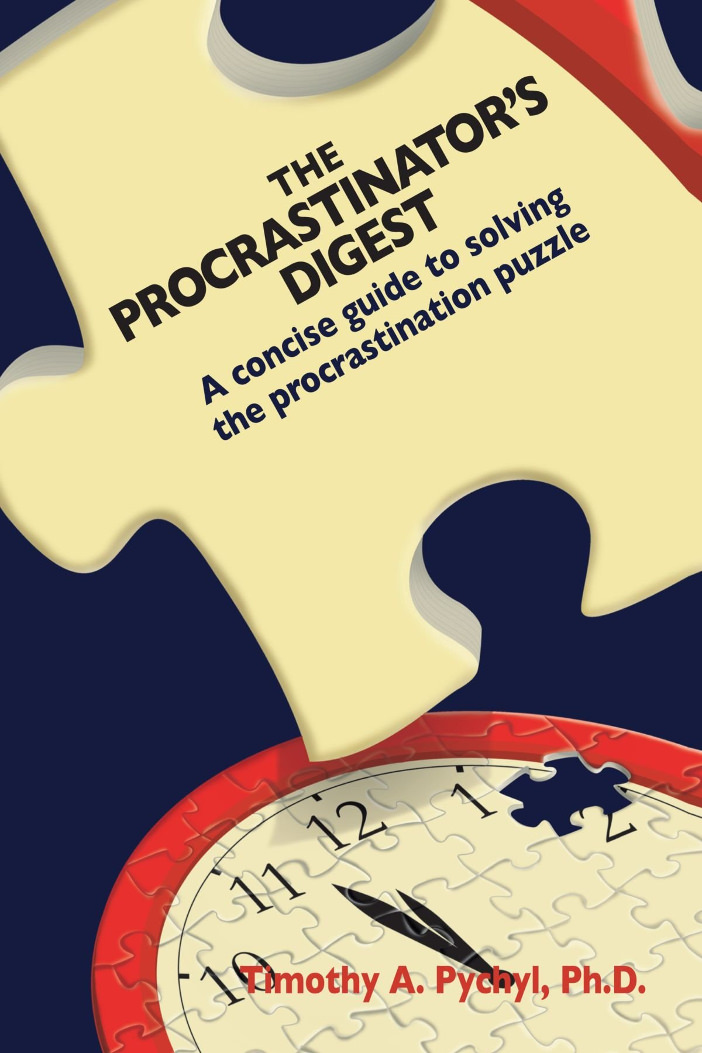 It would be far better to work on the unhappiness rather than the procrastination.

2 thoughts on “The Art of Procrastination”