Hello corrosion fans and welcome to another week of car wreck fantasy.

Following on from last week’s example:

I thought that we could again focus on the expensive.

This one is an Austin Healey. These are suitably famous so that many people may have heard of it. Like other things famous it is high cost.

The closest I could find in shiny was this one:

listed at £65,000 so there is quite a bit of money that you could sink into this project Healey and still be ahead. (Assuming you’re ruled by your head rather than your love for metal corroding things which some of us are victim to).

You can tell things are getting serious when the listing has to state the specific model number 1966 Austin Healey 3000 MK3 Phase 2 U.K R.H.D as if any Austin Healey 3000 was not going to be of interest. This car is for the connoisseur or the collector.

And one of these must have caught up with it because I notice that it is now sold.

Firstly a very crisp and accurate listing, how many have we seen where it lists the exact date of first registration 16/02/1966. Would that more sellers would do this.

I can’t be the only person searching for a car that is exactly as old as he is, and that is rendered impossible if the closest description is “1966”.

So according to: https://en.wikipedia.org/wiki/Austin-Healey_3000 the Healey 3000 was made between 1959 and 1967. That makes this quite a late one. 91% were exported – mainly to North America. This must mean that a great many are LHD. This must be why the advert is at pains to point out that it is a RHD car and an original RHD car at that. Judging by this advert RHD–LHD conversions are very popular in the UK http://www.rawlesmotorsport.co.uk/car-brokerage/cars-sold/austin-healey-3000-mkiii-bj8-phase-2.html. 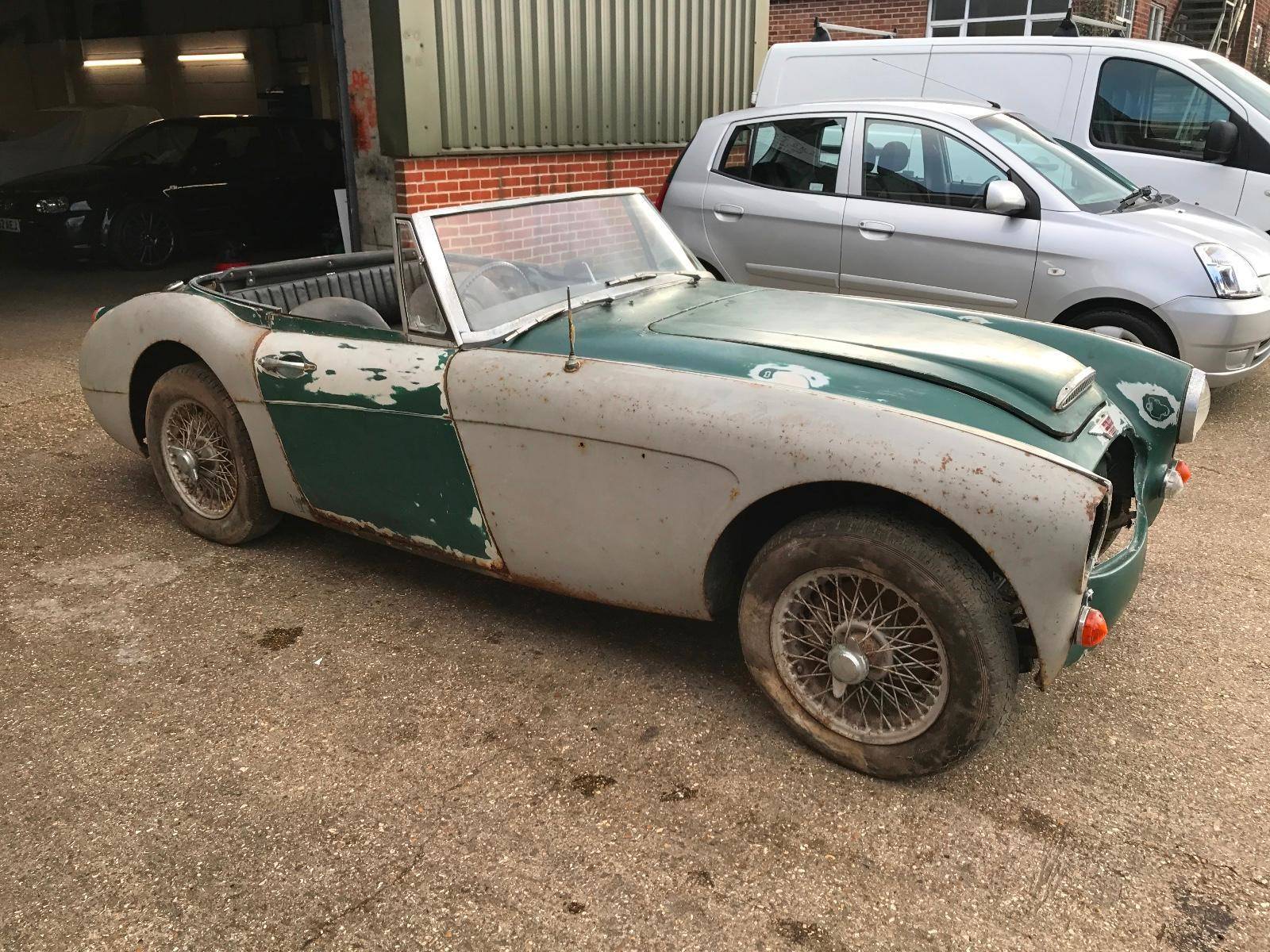 In comparison to some we’ve seen on Wreck of the Week this is in pretty good shape. Some serious rust in that door I notice and who knows what’s under the replacement wing.

The advert indicates that “finished in the car’s original combination of British racing green with black interior”, obviously discounting the large quantity of grey primer. 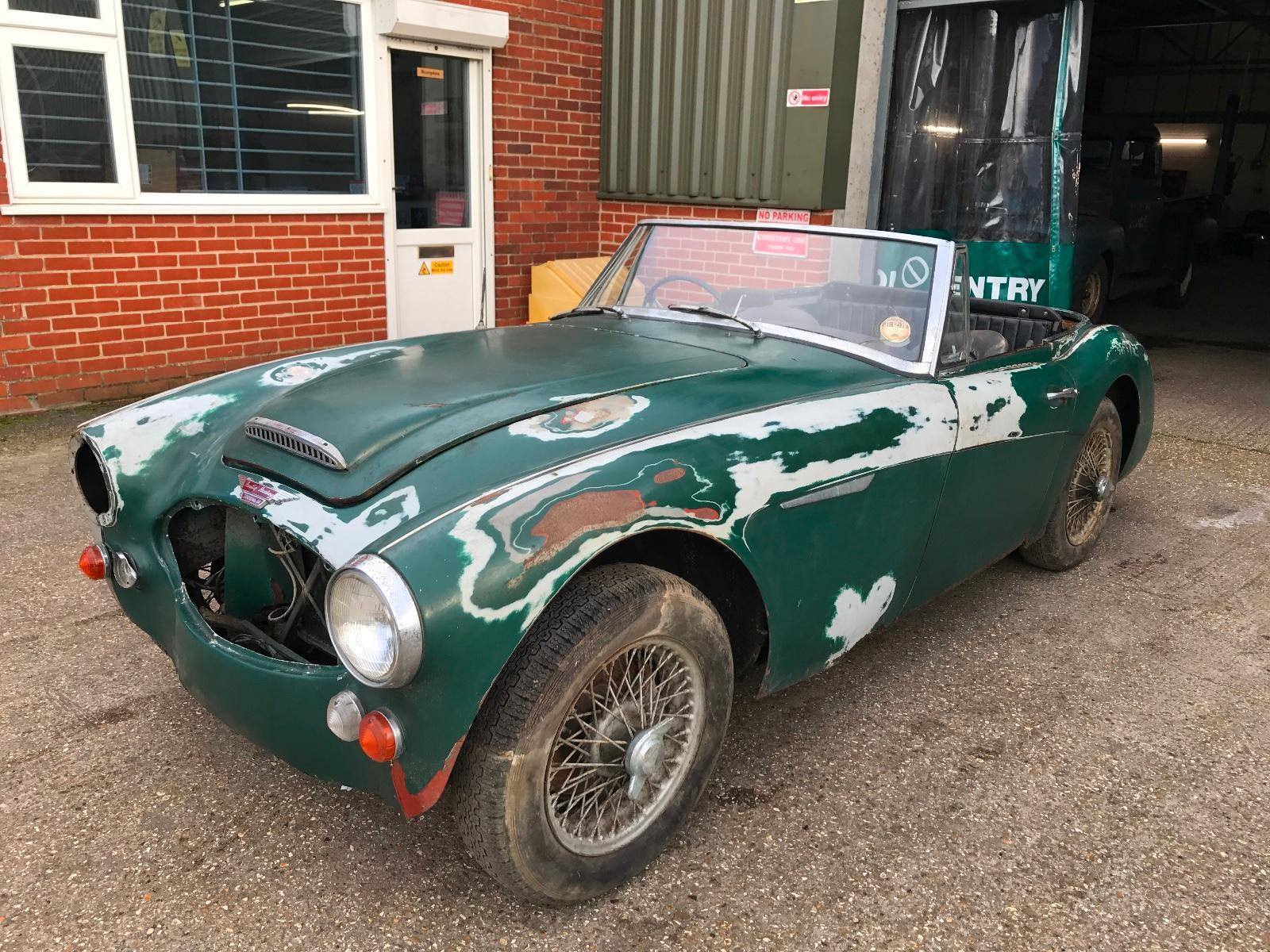 One of the great things about a quality car from a commercial seller is the range of photographs on offer – 12 for this one. This side looks healthier. I’m hopeful that they’ve kept the chromework somewhere although perhaps if you can afford these numbers buying new chromework is a minor obstacle.

One thing that you don’t get is the interesting tales about what is wrong with it. – No clues here as to whether there is more here than meets the photograph.

However even cheap cars can be a victim of this my favourite recent listing stating “needs work” with no further clues as to what that actually meant. 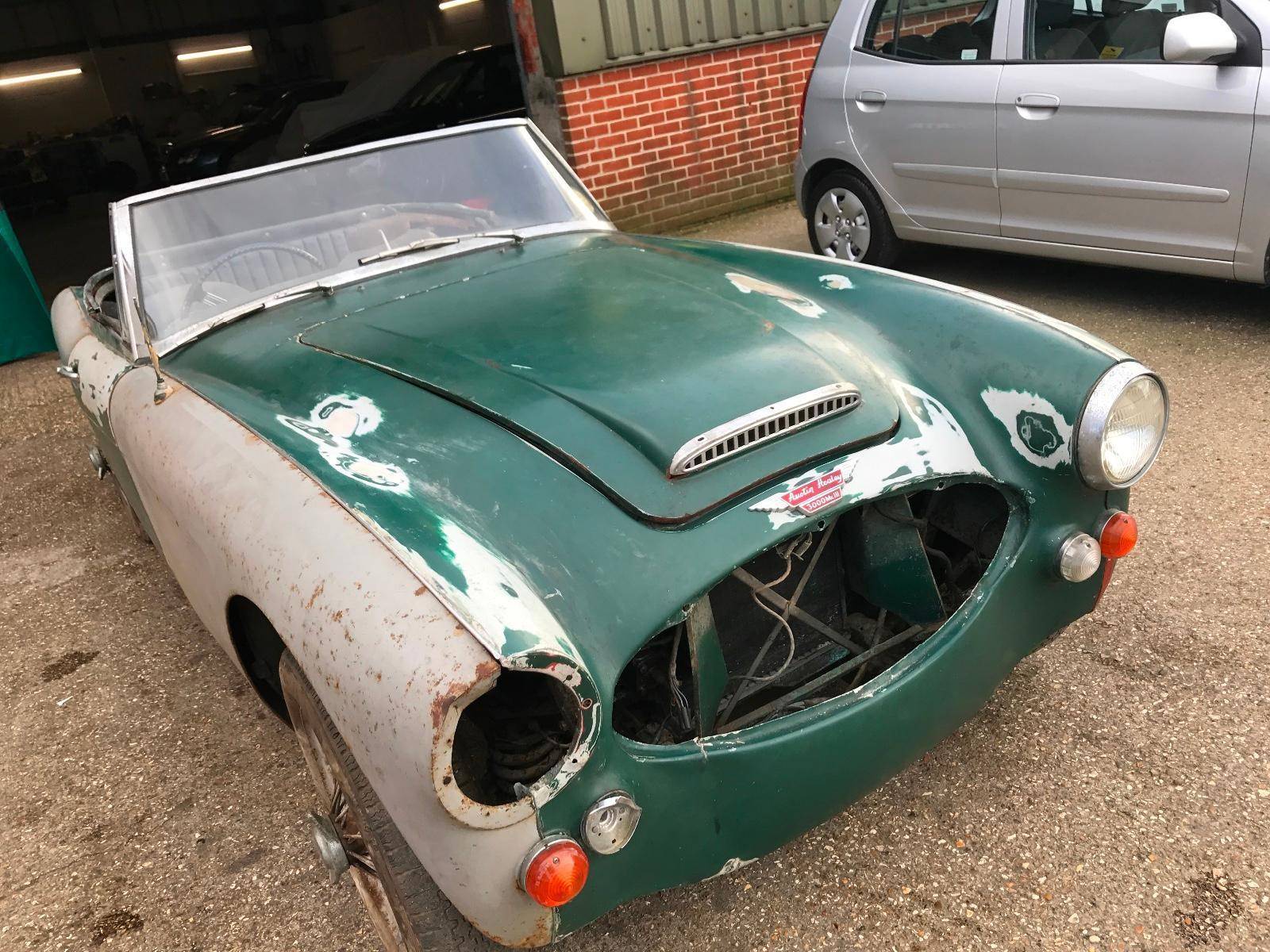 This one is a BJ8 which apparently is the more powerful of the Healeys with some desirable additions like power assisted brakes. If you’ve never driven a car without a servo believe me this is a thoroughly worthwhile development. 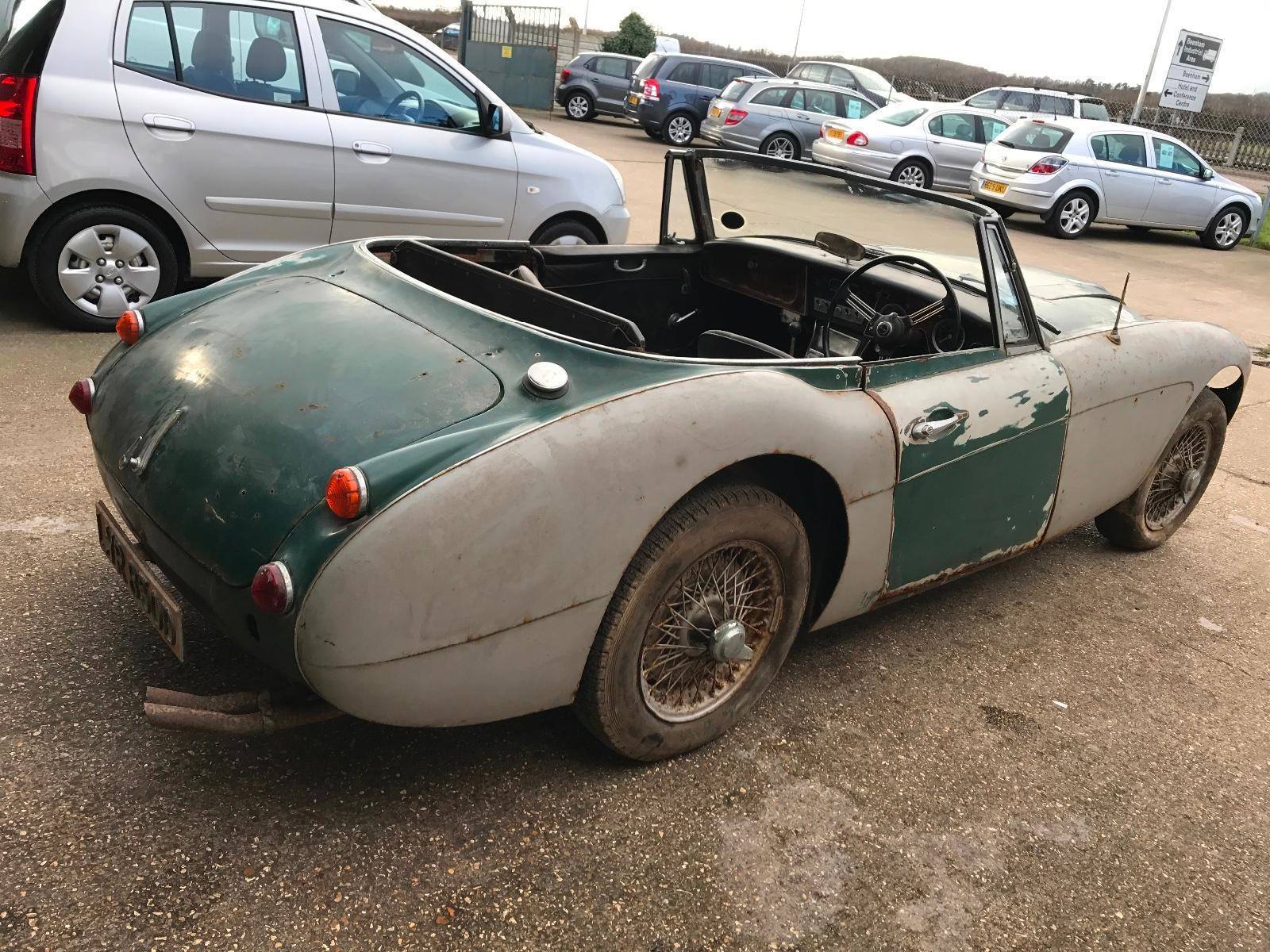 Apparently with only 2 owners from new it’s a shame that they never thought to spray it with wax. But after 52 years it’s a bit much to expect a restoration project to look any better than this. The shiny versions having been through the restoration process sometime in the recent past.

In the 1960s rustproofing was not what you expect today and an 8 year old car was commonly considered fit for little. 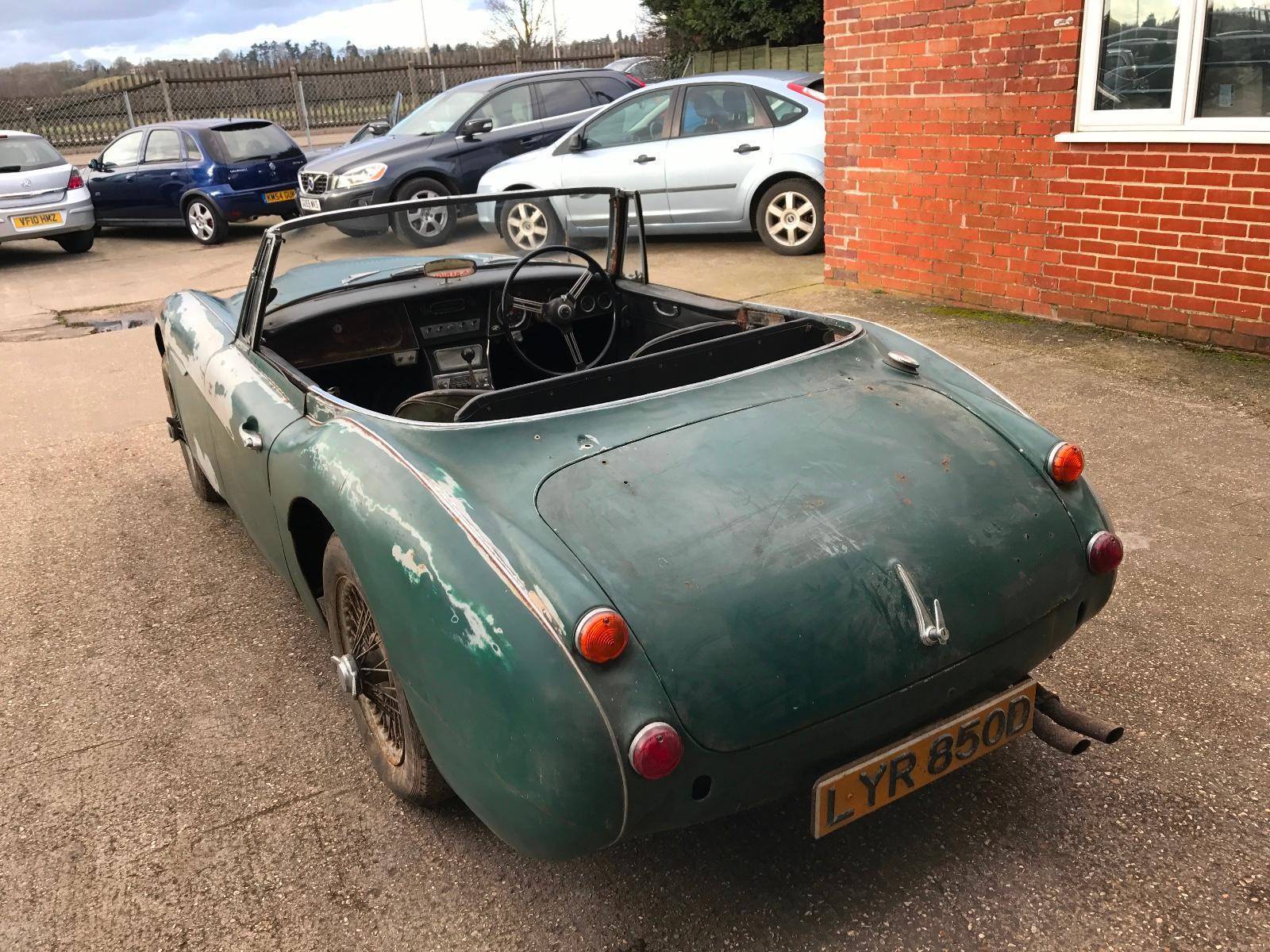 I‘d always wondered at the term “matching numbers” as used in this advert. Apparently this is where components are those that were originally installed.

In this case I am only aware of chassis and engine numbers being registered so I imagine it is these which verifiably match what they should be. 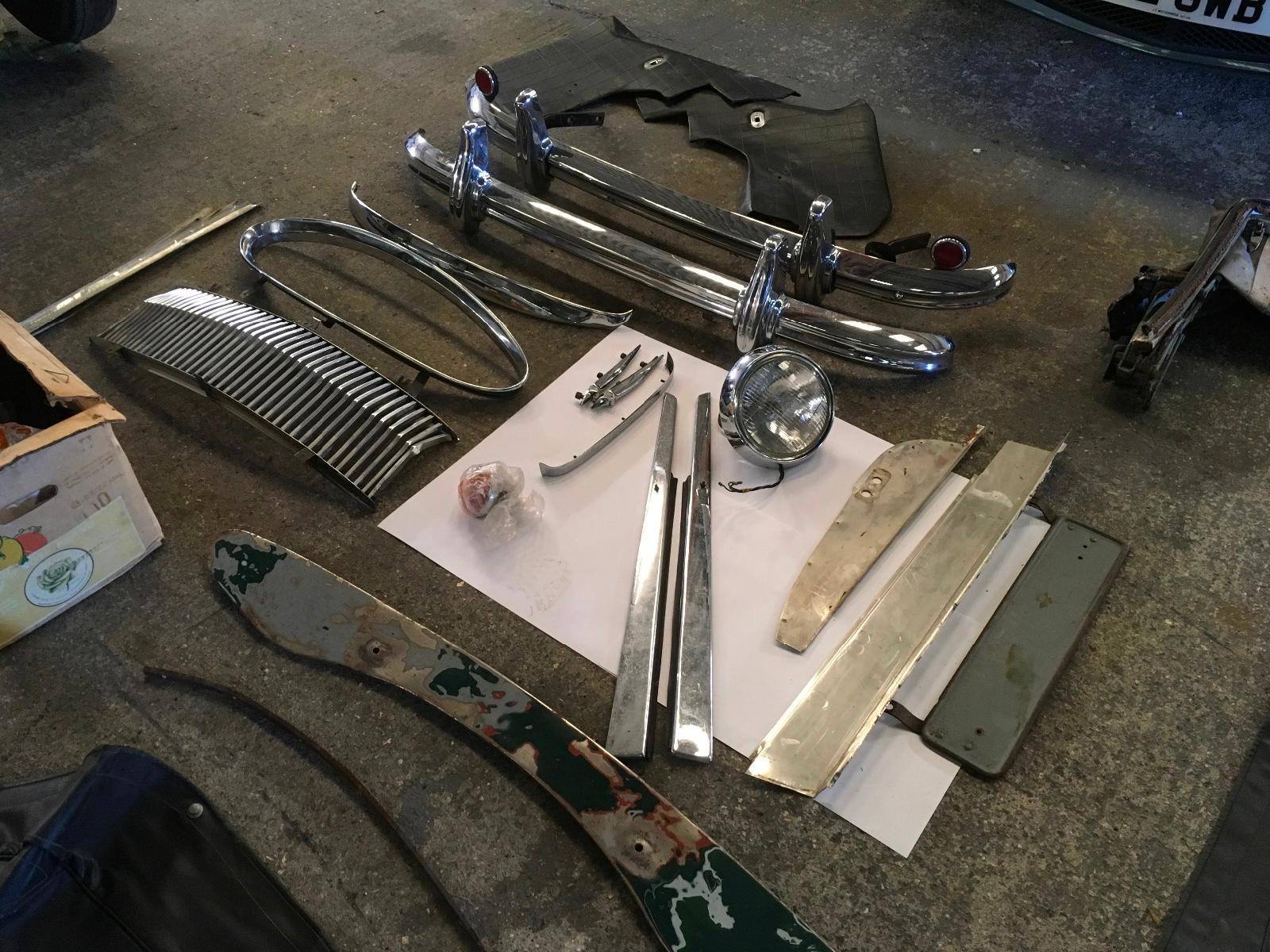 Well that’s a relief – the chromework is present, rechroming gives beautiful results but you do need to be resourced to fund it.

These parts look in good condition. Perhaps the last owner (who apparently had it since 1978 – so took it over only 12 years after manufacture) took more care of it than it appears. Chromework tends to pit rapidly unless cared for. 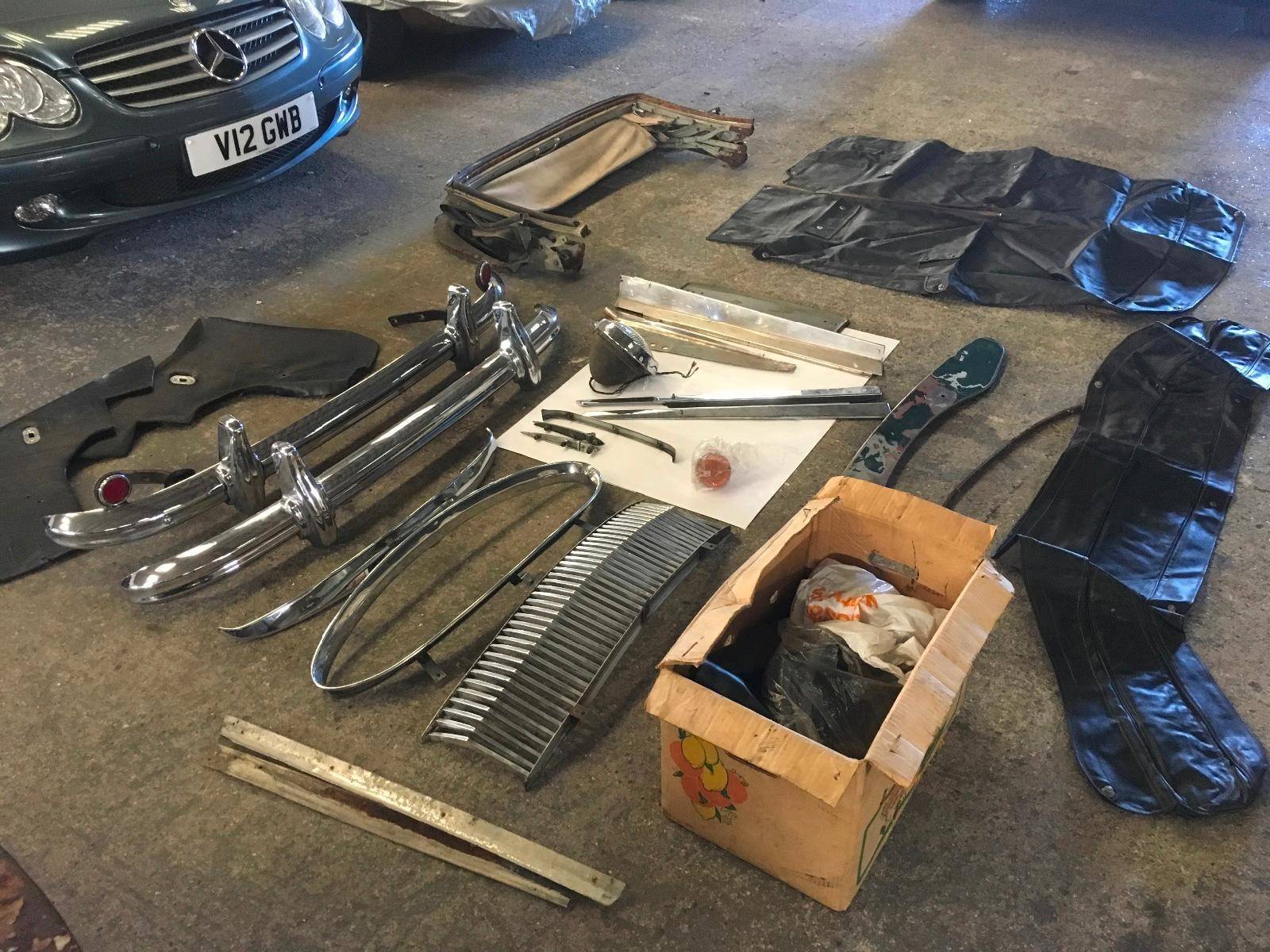 Apart from the grillwork, bumpers, hood, light there are quite a few items I cannot identify although no doubt bringing a gleam to the restorer’s eye. I’m not clear about the covers upper LHS (radiator muff or similar?) Healey 3000 fans please enlighten me. 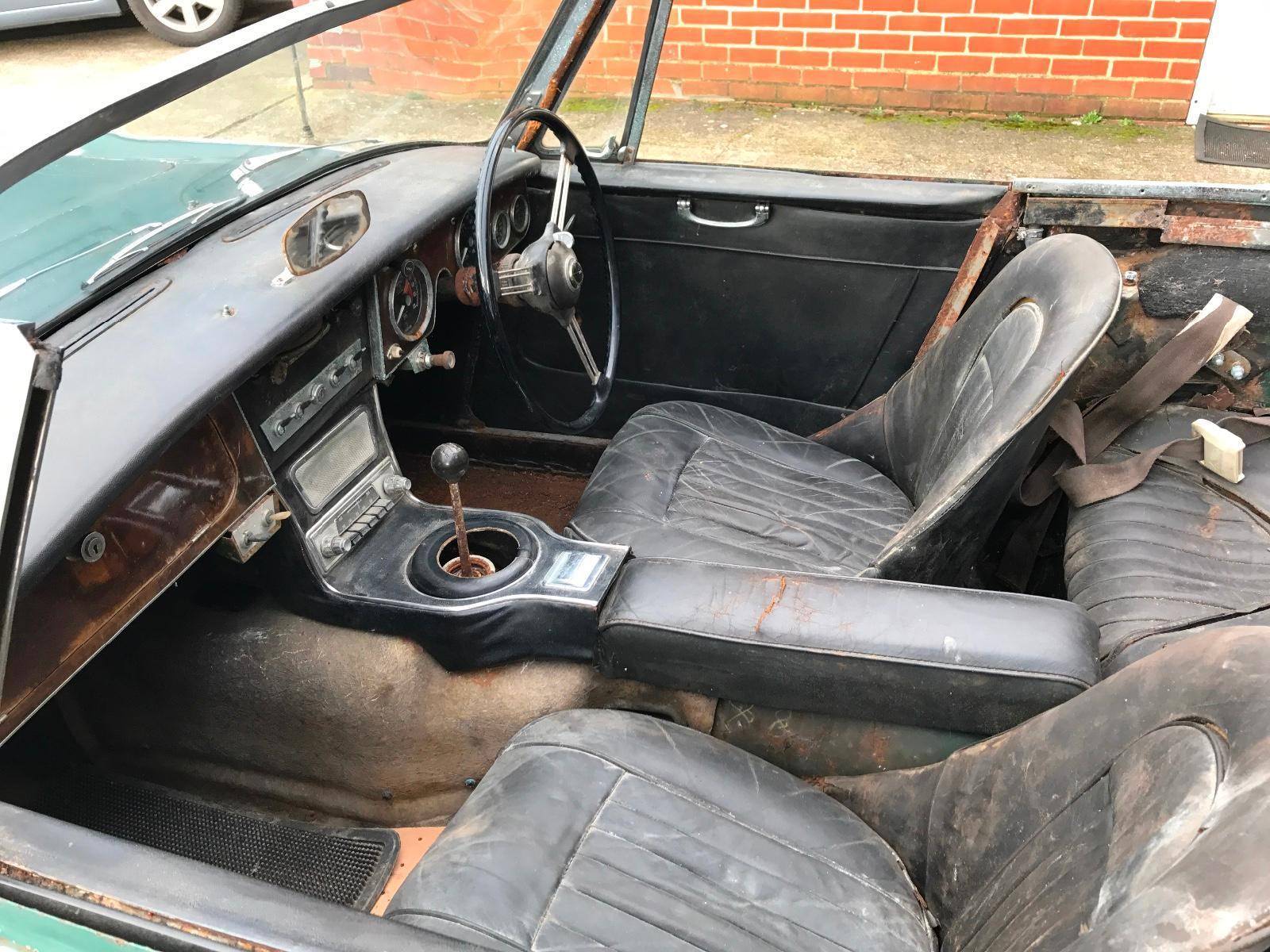 Apparently under this is a gearbox (with overdrive) having covered only 51,000 miles which seems incredible. That’s less than 1000 miles a year since registration.

For those who have never encountered overdrive: in these days of multiple ratio gearboxes it has probably been forgotten that at one time gearboxes tended to operate up to direct drive. So when you had selected top gear the engine was driving straight through the gearbox. The output shaft of the gearbox turning at the same speed as the engine. In many cases the most fuel efficient ratio was lower than this i.e. that the output from the gearbox would be turning faster than the engine.

On modern cars the 5th, 6th and so on gears achieve this in the same gearbox.

On cars of the 60s a separate gearbox was hung behind the main gearbox (often being bolted to it). This was an overdrive gearbox. They were often electrically controlled – a little switch would kick in overdrive. Effectively the car gained a couple of extra gears. The downside was the extra weight of the additional gearbox.

It was popular on larger-engined cars, for those who could afford it (it was an option). 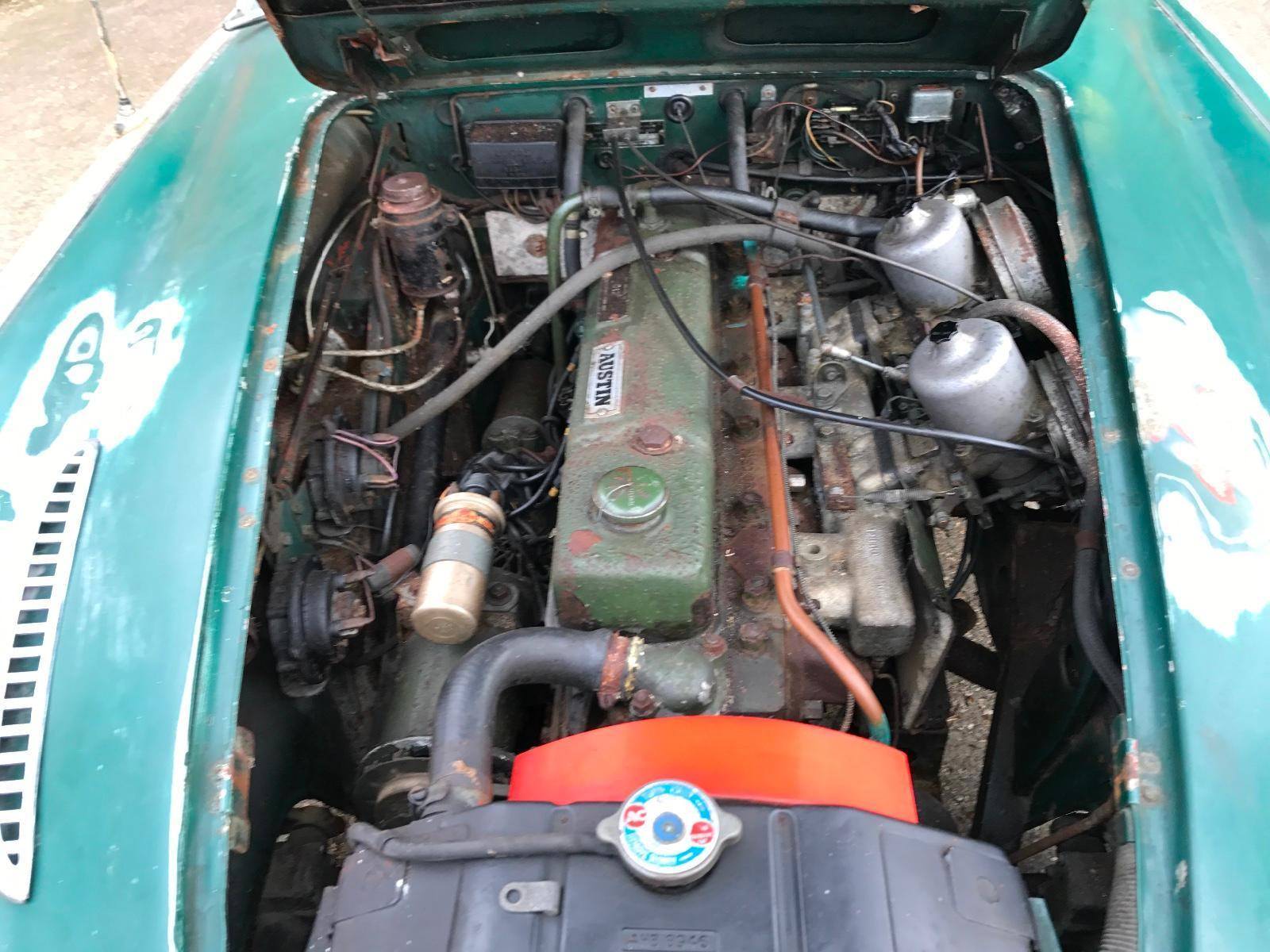 This is a 2,912cc petrol engine. This was a bored out version of one designed for more stately cars like the Austin Westminster A99, the Wolseley 6/99 and the Vanden Plas Princess 3 litre.

The difference with the Healey could not have been more marked. It strikes me more as the type of car that Terry Thomas (in character) would have liked to have owned. 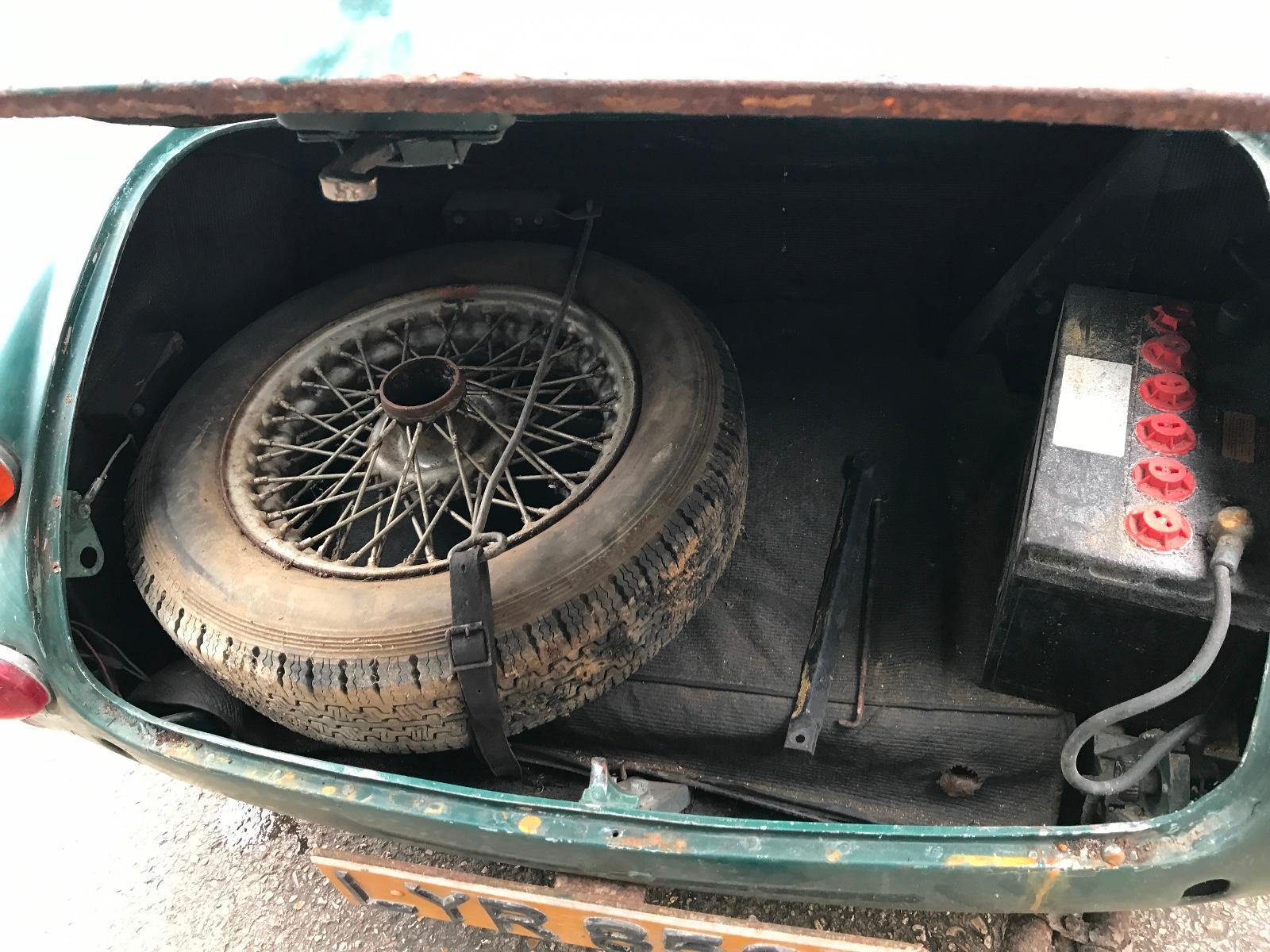 I remember that this rear end would break out under pressure. Oversteer being the order of the day. In fact somewhere I think it was described as a “hairy-chested” car (presumably because you needed large cajones to drive one swiftly). 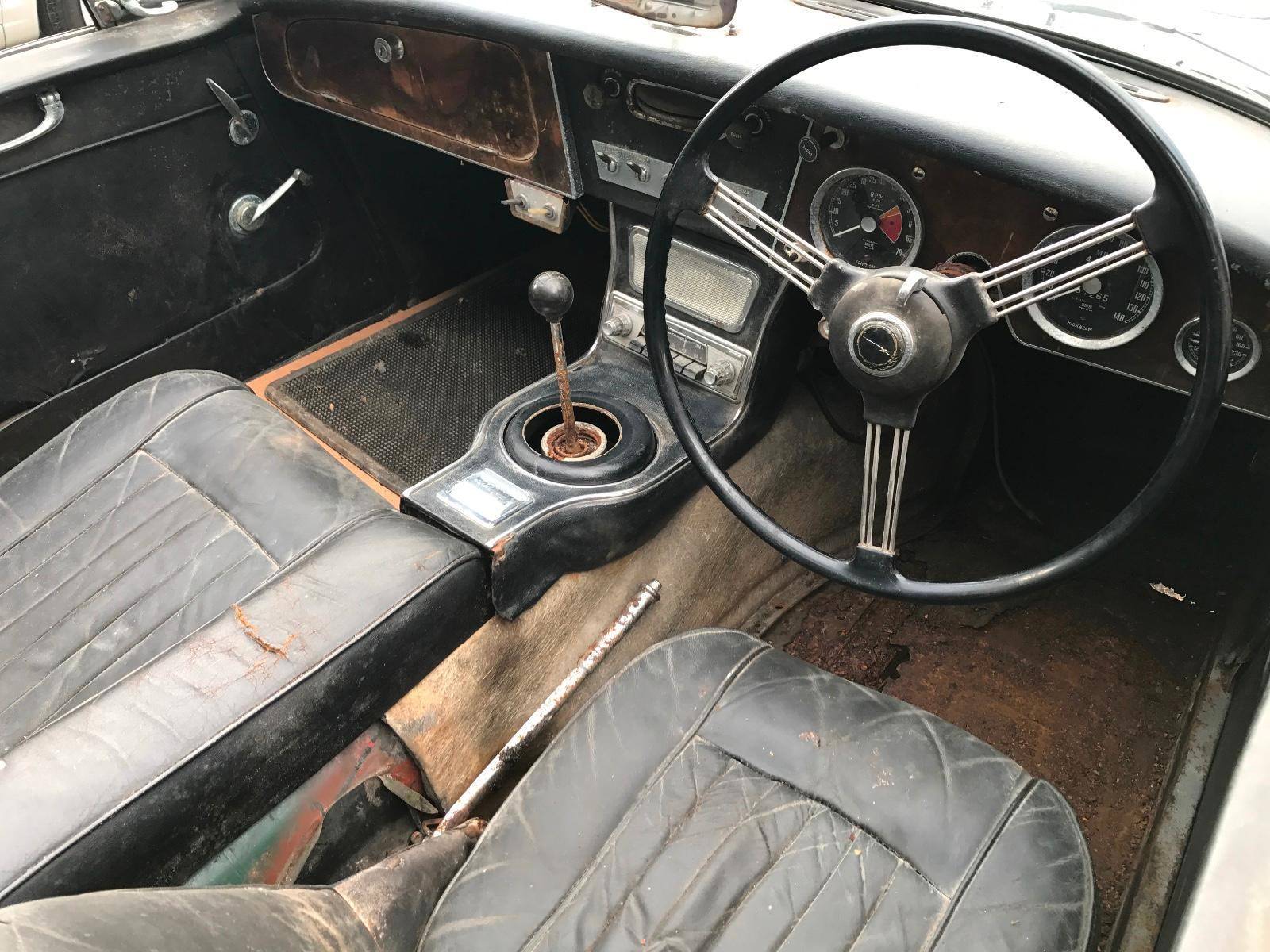 Years ago I think the Austin Healey 3000 was considered a cheaper alternative to the Jaguar but with just as much fun. Now no longer cheap, as we can see here you need to dig deep to afford one.

This looks like the floor is going to need welding. There appears to be daylight shining through here. When even the gearstick is rusty it’s quite likely the whole interior is flaking.

The glovebox looks like the veneer has taken a hammering. But whether you could write that down to patina and keep it like that in a car this valuable is debateable. 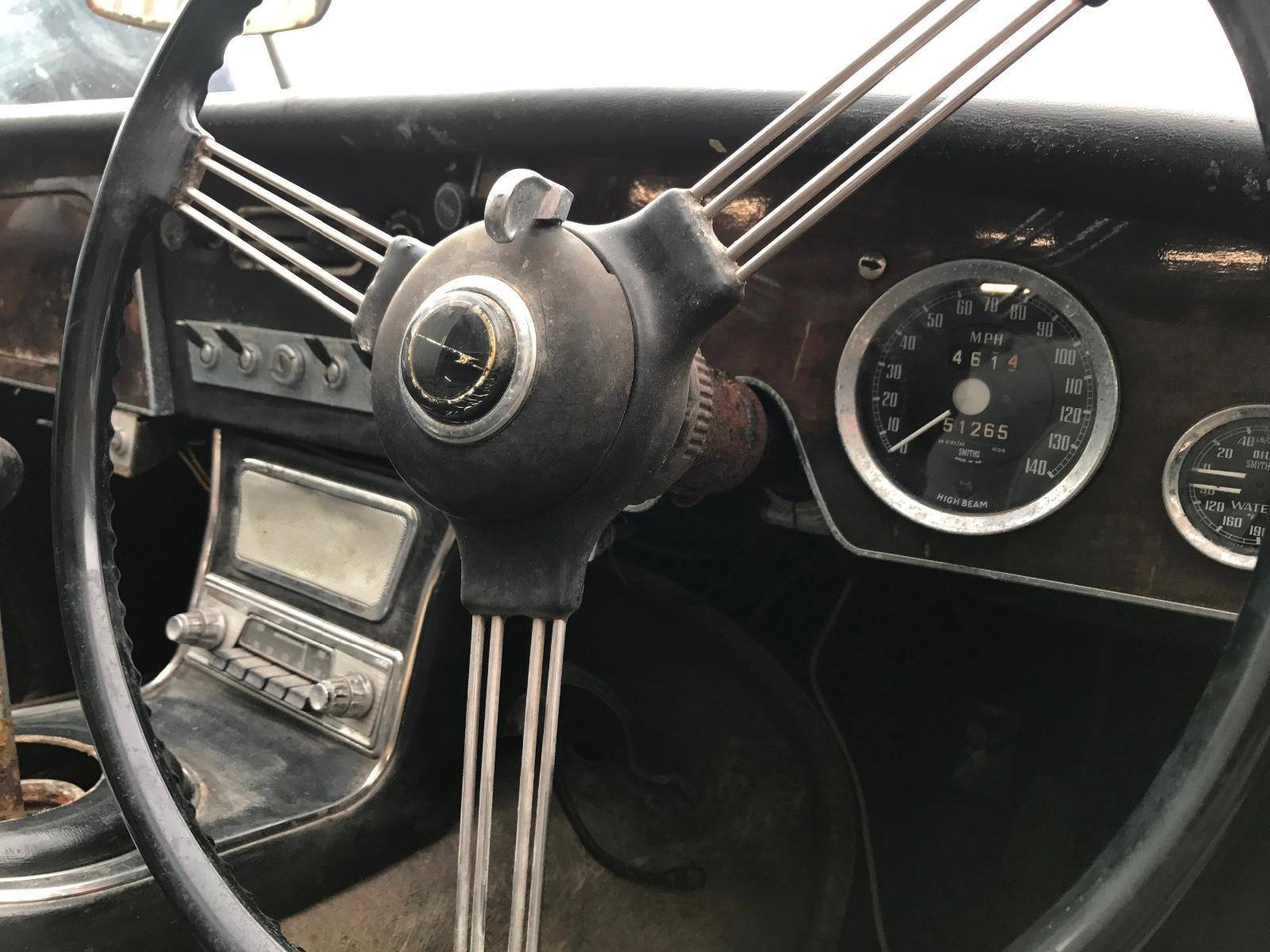 They made proper steering wheels in those days, none of your tiny rally wheels here. This looks like it would be at home in a Routemaster. I’m guessing driving with the wheel polishing your thighs was all part of the experience.

However those gauges are to die for. Proper chrome bezels and manufactured by Smiths, how lovely.

Well sadly it has gone so all you lottery winners will have to look elsewhere for your old car fix.

Alternatively be back here next week for another edition of Wreck of the Week.

I realise that there might be some new visitors so here are all the previous Wreck of the Week postings in order:

The property website from which the original idea (for Wreck of the Week) came is due credit:

(Unlike that site, which is about houses, this series of blogs is and will be all about rusty vehicles).